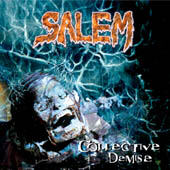 The three video clips by Salem included are actually songs from their latest album called "Collective Demise". This is the fourth full length from the band that started business back in 1985. The current line-up is made of three old timers: Ze'ev Tananboim (vocals), Lior Mizrahi (guitar) , Michael Goldstein (bass) and a couple of recent additions : Nir Nakav (drums) and Nir Gutraiman (guitar). It can be read in the band' bio that '"Collective Demise" contains 12 new songs which textually are snapshots of our reality since September 2001'. It is also said to be the most aggressive album to date from the band that shared stage with famous acts like Megadeth, Entombed, Ancient Rites and Rotting Christ.

The first part is a gallery made of the cover art of "Collective Demise", individual pictures of the musicians and some promo shots of them. Then comes the meat, the videos and this is what they are containing.

1. Act of War: The intro is made by a traditional instrument called an ‘Arabic Darbuka’ (percussions). The heaviest number by its music and significance. The vocals are the screaming Death type with lots of guitar riffs on a nonetheless melodic composition. Angelic female back vocals do the calmer partitions of the songs. It shows the hard reality of terrorism with a black (brown) and white video of a man preparing an homemade bomb, then taking the bus to commit suicidal bombing. After the fact, the father of one of the victims is interviewed by the media and his reaction to this brings him to say he's happy because it was done for the good cause being encouraged by the government. Salem's message is loud and clear: they are all against this and want to promote construction rather than destruction.

2. Al Taster. My favorite one also begins with traditional instrumentation before the thundering Heavy Metal takes over. This heavy melody contains very good guitar harmonies and female vocals before the lead singer is introduced. An opus with an excellent blend of Doom / Death Metal. It was the first single and video released in Israel back in June from "Collective Demise". Interesting to note that it is a cover of an old Jewish hymn and the lyrics are from Psalms, chapter 102, verse 3. On this video, we can see more of the band members and a beautiful blonde lady dressed in black bringing flowers on the grave of a lost loved one. Sad and beautiful story.

3. 'Broken Yet United'. It is a live presentation of the musicians. The composition is here again a good Doom / Death mixture. Also includes the traditional percussions (Arabic Darbuka) on a highly energetic, raw and melodic song. Some pictures are back-stage, other in studio but most of the action takes place in concert showing their relation with the crowd that is having a hell of a good time. The light show is at times totally blinding, just like an explosion.