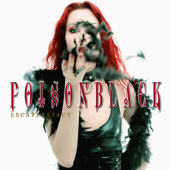 Type:
Release Date: 2003
Label: Century Media Records
Genre:
1 Glow Of The Flames
2 Love Infernal
3 The State
4 All Else Is Hollow
5 In Lust
6 The Exciter
7 Lay Your Heart To Rest
8 With Her I Die
9 Illusion/Delusion
10 The Kiss Of Death

During my last year interview with Sentenced's Ville Laihiala we found out that Ville hates to sing and loves playing guitar in what eventually translated into his new project PoisonBlack where he handles lead & rhythm axe duties and J.P Leppaluto (Charon) takes over the vocals. "Escapexstacy" being advertised as mix of Ozzy Osborne, Paradise Lost and Type O Negative brings elements of all aforementioned bands but it also fails to escape from the domains of the member's original bands.

By saying that I feel a little disappointed cause even though I'm a big fan of those two acts (Sentenced and Charon) I was looking for something more distinct and creative. "Escapexstacy" is a solid gothic rock album with very accessible melodies, emotional, sorrowful vocals (one of the best points of this release) and lyrics about lust, desire and sex. As you can see not much of a difference from their main projects except lyrics, and even though Ville's guitar is heavily influenced by Zake Wilde ("No More Tears" era), being a member of Sentenced since '96 lives the mark on the structure of compositions and overall atmosphere of the album. I'm not necessarily pointing it as a terribly bad thing because gothic rock fans will most probably find it very appealing and put that argument in pros rather than cons.

After taking the "bad" points out of my system I have to mention the excellent guitar/composition skills of the main man Ville Laihiala. While one might argue the point of not seeing anything masterful or extraordinary, I can't stop and not commend his understanding of the music and its translation to the guitar. It's not always the speed or complexity of the arpeggios that makes a guitar master but the way in which all elements create perfect harmony and atmosphere of the album (so often lost in today's releases). Ville knows when to crank it up in bass driven 'Love Infernal', crunchy 'All Else Is Hollow' or when to tone it down to secondary role like in 'With Her I Die'. Instead of showing off he preserves the balance between the melody and power to fit lyrical concept and to keep songs melancholic tone.

Bottom Line: Definitely too light for death/black metal fans but if you’re rooming for solid gothic-rock PoisonBlack is the end of your journey.