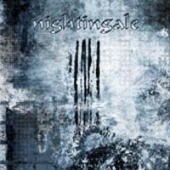 Accomplished producer (Marduk, Opeth, Theater of Tragedy) and musician (Edge of Sanity, Bloodbath, Star One) Dan Swanö has been involved with so many musical experiences to satisfy his abundant creativity before concentrating on his full time battle horse Nightingale. Along with brother Tom (Dag) on guitar and keyboard, Erik Oskarsson on bass and Tom Björn on drums, Mr. Swanö; vocals, keys and guitar, decided that with such a versatile group (all multi-instrumentalists) the diversity of the songs would be given a proper and highly effective existence.

Being a big fan of Ayreon and Mr. Lucassen, I found myself in a comforting situation when I first heard Dan's nice and melodic voice. Melodic could also be used to describe the general path taken for the compositions written in a progressive structure. So we have in a way a best of both worlds under one cover. Nothing scary, sadistic or extremely heavy to be found here - be warned. To be more specific, I would say that half of the songs are cool and catchy while the other half are more adventurous. 'Shadowman' has a happy mood and very nice 12 strings arrangements. A couple of kickers are included, namely 'Into the Light' and 'State of Shock'. Both contain heavier guitar works and the awsome Hammond organ' sound. In the middle of all this, 'Eternal' takes on an epic feel with its 11 minutes plus of symphonic keys, numerous solos, in an ever-changing progression of good sections. For me, the best and most prog compositions are the two last ones that kind of melt into one another, forming the opus' grand finale.