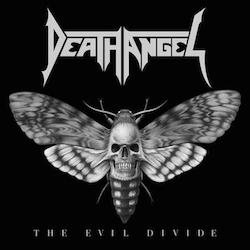 In your face thrash metal galore!! These native Californian's put together one hellov a good release here. Be it the music, the production quality, the mixing, vocals, the whole deal Death Angel marks into their discography. Every song on here averages 4-5 minutes in length. Definitely worth checking this album out. Pure thrash metal to the core. I think this is one of their top releases to date. If you have a contention regarding that, just listen to the whole album and you'll see what I'm talking about. I don't think there will be any arguments on how good this release is.

The guitar sound quality is a little bit muffled because of the production , but not enough to count this as one of their best releases. The energy is way high on here. You can feel the vibe of the album it's totally upbeat thrash and vocal destruction. I like every song on here. Things seem to fall into place. The rhythms, the leads, the vocals and the music overall are superb. I cannot get enough of this release. It's one of those albums you can play and hear different things each time you play it. Kind of like Metallica's albums of the 80's. This one chalks up within the realm of Act III.

Riff-tastic album, if you're a guitar player then you can hear what I'm talking about. The vocals compliment the music. Not too harsh, just enough to emit cosmic energy to this. The background music is good as well. Every song on here with worth mentioning. So, if you're a fan of thrash metal and you don't have this, get it! All I can say is just that they conquered in every aspect on here. Totally worth getting. I'm not sure of the new release it's coming out on May 31st. So, we'll have to make a comparison as to which one has the best energy and music! For now, we have to focus on past releases.

In summation, Death Angel chalks up one heck of a good release here. All the songs are good, and everything flows smoothly. I was taken aback when I heard this album. Totally rips in every sense of the word. The one thing that I'd take out though are the chronic leads. That's the only beef I have for the album. They would score higher if it weren't for those annoying leads. Otherwise, simply close to a masterpiece. So yeah, shout your opinion on this. I'm sure it'll be positive. Get this album ASAP!!

The Evil Divide consists of 10 pieces of thrash speed metal which, after three years of silence, Death Angel and Nuclear Blast want to kick our asses with. The proposed thrash is a portion of music from the pinnacle of the class. These 45 minutes of fast American thumping clad in a black/white cover should satisfy all thrash maniacs.

I must admit that I was not a follower of the Church of Death Angel. They charmed me with album The Ultra-Violence, but my enchantment was fading away with each following album, until I finally forgot about the band. After their 2001 reunion I approached their publications like a child that got severely burned - with morbid caution. It was after The Dream Calls For Blood that their music started to entice me again. Moreover, review of that album was also going to appear to infect the others with this Filipino bug but for reasons unknown (read - laziness) it was never formulated. The first, even fragmental hearings of The Evil Divide swept the other vision away like an avalanche.

The eighth child of Americans has all the advantages. There's the energy, the momentum, correct tempo - sometimes in hyper-speed - (Cause For Alarm, Father Of Lies, Hell To Pay) there's melody (whole thing but especially - Lost), there's a message (as a whole). Virtually every song can do something to attract. The only thing that it lacks for me it's the guitar sound, they could be a little meatier, but such is the style of Death Angel and you either agree with them or out you go. I've often gotten pissed off when I read about the superiority of the new Anthrax over Death Angel. But I do not want to stand on either side of the barricade, because I like both bands, and if I may add something here, personally I prefer the previous Anthrax.

And, since we are on the subject of Anthrax, it’s the themes from Among The Living I find on The Moth, and crossover structure is very characteristic on Cause For Alarm. After repeated ‘molestation’ of The Evil Divide I could go on talking about each song, but listening to the whole album would be a way better choice. I encourage you sincerely! I also deliberately did not choose my favorites because the entire album is my favorite, which I already know, will take place in my Top of the Year.

Not one heavy metal, speed, thrash maniac should disregard The Evil Divide, and if I'm wrong I'll throw the first stone at myself. So I surrender my assertion to be deeply analyzed, best with the sounds of Death Angel!