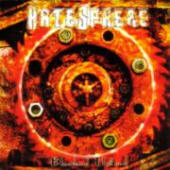 Hatesphere is an example of a band that missed the bus. Now why do I say that? Well, "Bloodred Hatred" is an album that seems to be too little too late. It’s a good and competent melodic death/thrash metal album, but in today’s metal market it has come out at the wrong time. Maybe 1-2 years earlier and you would have seen this record receive some pretty solid feedback, but we are not at the beginning of 2002 or 2001. What I am talking about is market saturation. There is too much of a good thing with melodic death metal. There are countless bands trying to forge names for themselves in this area.

However that being said, if you like straight up melodic death that doesn’t dick you around then give Hatesphere and "Bloodred Hatred" a spin. It's fast, it's energetic and once you are drawn in, there is no chance to get on out. Infectious guitar leads, insane drumming, murderous vocals, all the typical and solid melodic death ingredients can be found here. These boys do know what they are doing.

I am not against melodic death metal, there is a plethora of upcoming melodic death metal bands in the world, but I think for now this scene is becoming one of the hardest to break into. It is going to take a pretty special record to take my notice. Do these lads have the talent? Quite possibly.

Bottom Line: Good, solid, but safe and predictable. Nothing eye catching, but rest assured these guys from Hatesphere may be something to listen to in the future.