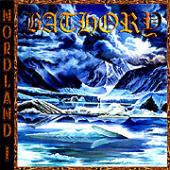 Bathory has been around for some twenty years and released a lot of albums in their career. The promo described "Nordland I" as powerful metal with a nordic spirit. So with this in mind, one could expect an epic opus with power metal structures and so on. Well in fact it's not, well at least... ok let me explain a bit what's going on.

The opening track, an instrumental with all the epic ingredients like majestic keys, loud percussions, you'd assume the follow-up is a double bass, fast guitars, high pitch male vocals etc. Not at all! Instead, you have a mid-pace, clean and medium-pitch male vocals, strong, good percussions and bass parts, fuzzy guitars on an overall nice and catchy melody with an epic feel. The riffs are a bit reminiscent to Uriah Heep and the finale is grandiose. The next two songs are generally following the same path but I personally liked 'Vinterblot' more for its slow pace, great guitar work and lead vocals. Some choirs are also included in these three but the best sample can be found in 'Dragons Breath.' Starting with 'Ring of Gold' a more folkloric mood takes over and this same song is completely acoustic and has some good vocal harmonies and nature samplings. On the other hand, 'Foreverdark Woods' begins with bird samplings before a trotting horse and cool mandolin runs join in, leaving the way for the heavier epic mid-pace mode. This one ends in a typical hard rock manner. Then comes the power metal stuff on position number seven and eight with its usual elements. A last recall of the previous mid-pace heavy style before the closing instrumental appears in an all-ambient composition of nature sampling and keys.

The somber prelude greets us as the beginnings of 'Shores of Flames' did in "Hammerheart". Epic, majestic and hundreds of other grand adjectives. Ok, so before all we get too excited "Nordland I" isn’t as good as "Hammerheart" or "Twilight of the Gods". It’s an exciting album that blows away "Destroyer of Worlds" and contains all the great ingredients that made the two aforementioned albums so great. Rat-shit production, Quorthon's feeble attempts at clean vocals (which everyone knows is really bad, but enjoy nonetheless), hammerhead drumming, and epic soaring passages in combination with somber melodic doodling.

The major problems with "Nordland I" are the monotony factors. Everything is either 100% supercharged drum blasting (allowing little room for music to breathe) or more melancholic passages that tend to get a little dry or dull. With "Nordland I" Quorthon seems to pick a formula and stick almost religiously by it, through thick and thin. I mean, the formula works to an extent... but things can get tired eventually.

That all being said, "Nordland I" is a worthy album to add to your Bathory collection. Not super stuff, but not too shabby either.

Bottom Line: Well here you have it folks, Bathory returns to us in fine, fine form. Shit awful production, horrible clarity, but an aura and atmosphere that returns us to the days or lore... of Vikings and ice. This is Bathory, what more can you expect? But more to the point, what more do you want?