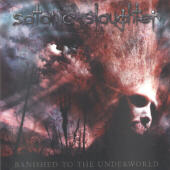 Satanic Slaughter is the brainchild of Ztephan Dark, who created the band way back in 1985. It wasn't until 1995, however, that the first full length came out. The world famous producer involved was Dan Swanö. After numerous musician changes, the current line-up is now made up of Martin Axenröt (drums), Ztephan Dark (guitar), Filip Carlsson (bass), Andreas Deblén (vocals) and Stefan Johansson (guitar). So far the band have seen about thirty different members through the years.

Now, onto the album. What a dynamic and well-done mixture of black and death metal! This album will please for sure fans of both styles. “Banished to the Underworld" is mostly fast, the drumming completely crazy, the vocals are black and somewhat screamed, and the guitar work splendid either by the riffs or the lead. Guitars, guitars and more guitars! Riff after riff will give you a ride on what it is all about. Ten intricate compositions of raw and sophisticated metal that manage to keep a melodic structure mainly caused by the lead guitar guiding you through a chaotic path. Without this album, your collection would be missing a piece of the never-ending metal puzzle. Songs like 'Infernal,' 'One Night in Hell' and the title track are some of the finest moments with their own share of bloody good metal involving extras like slower doom passages, thrilling moods, pounding percussions, clean guitar notes and solos. Once in a while, we have very deep guttural style death vocals as a bonus just like on the intro number 'Bringers of Armageddon.‘ To close the massacre, the last song goes as far as including samplings, acoustic guitar, punching drums, screams and whispers on a slower pace changing into something horrifying, enhanced by effects on both vocals, thus 'Ending in Misery' as it is called....

Bottom Line: A grim and macabre walk into the dark side.