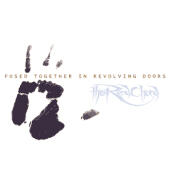 ::   ::
Type:
Release Date: 2002
Label: Robotic Empire
Genre:
1 Nihilist
2 That Certain Special Ugly
3 Catalepsy
4 Like A Train Through A Pigeon
5 He Was Stretching, And Then He Climbed Up There
6 Breed The Cancer
7 L Formation
8 Dreaming In Dog Years
9 Sixteen-Bit Fingerprint

Swedish death metal. American death metal. Everybody just seems to be a happy camper as long as their death metal fits into one of those categories, wouldn’t you say? If you stray, you pay, it seems. Maybe that’s why The Red Chord is hardly making a wave outside of their small circle, playing with other hardcore bands live (although this band is unmistakably death metal) and only being mentioned by a few death metal fans. Yet that doesn’t explain why so many reviews and opinions of the bands would be glistening.

To be honest, The Red Chord isn’t really tipping the scales in originality. Their debut album, “Fused Together In Revolving Doors,” is still death metal and there isn’t much you can do about that, save if it were a truly progressive effort. And it’s not, but that doesn’t really matter. “Fused Together In Revolving Doors” is an album that doesn’t really sound like something you’d here lately. Better yet, the ideas are actually creative. The songs are dynamic and unpredictable. They flow and are not just a pile of second-rate riffs that were slapped together without any discerning order. The musicianship is top-notch, and the production is absolutely killer.

There’s something extremely intelligent sounding about The Red Chord. Maybe it’s their hardcore influences, leaving no room for cheesy death metal antics. They play with the technicality of a band like The Dillinger Escape Plan or Converge and with the heaviness of a band like Immolation. Anyway, back to the point. What you get with each song on “Fused Together In Revolving Doors” is in fact creative and impressive. There are enough shifts in ‘Like A Train Through A Pigeon’ to please even the most impatient of listeners. The breakdowns found throughout “Fused Together In Revolving Doors” are also a welcome attribute to the fold. Anything in ‘Catalepsy’ is bound to make listeners shake in their boots. The Red Chord are even willing to throw in a few more twists and turns into their music. The melodic, clean guitar of ‘He Was Stretching, And Then He Climbed Up There’ is a good example. So is ‘Dreaming In Dog Years.’ You really just don’t see it being launched at you, and everything in the song seems like a highlight. Perhaps the most powerful song on “Fused Together In Revolving Doors” would be ‘Sixteen Bit Fingerprint’ for it’s excellent use of original guitar licks and the unexpected changes throughout it. It’s great to find an album that can really throw the necessary hooks at you throughout the duration of it enough times to make it rewarding and deserving of being played again. That about wraps this one up, except I might as well mention how impressive the production is. The drums actually sound like somebody is playing them. They’ve got depth to them, and the double bass drum actually has bass! Imagine that. The guitars sound excellent. Each note rings out clear and the guitar sound is thick, punchy and warm.

Bottom Line: It’s about time for death metal fans wake up and give The Red Chord a nod. Overflowing originality may not be on the menu, but at least creativity is, and it’s been cooked to some very high standards.