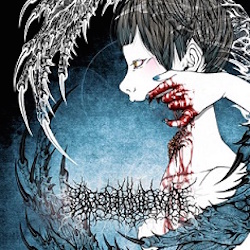 When I first spun the debut album from Japan’s Urobilinemia, Wriggling Chrysalis of Metaphysical Grudge, in my car, it was like I was hit with a ton of bricks. The first track, 'Endurance', was just a precursor to what my ears were about to witness before the second track started. Once 'Confusion A99' hit me, I wanted to drive my car off a bridge, then, if I survived that, take out both my kneecaps with a sledgehammer and writhe in pain while laughing uncontrollably in the moment because I would enjoy the pain. Yes, that’s how utterly brutal this album is.

Other notable tracks on this album are, 'Algophobia,' which means "the fear of pain," 'A Shout of the Deceased,' and 'Cerebral Infraction.' Goregraind’s vocals are probably about as brutal of vocals that I’ve ever heard recorded. Not only are the vocals awesome, but the actual music really sets the tone with an extremely tight and almost flawless production, which is extremely hard to find within the brutal metal genre. Most times production is lackluster and the sound is terrible, but you can tell the band members put a lot of pride and passion into Wriggling Chrysalis of Metaphysical Grudge.

The album cover is just as sick and brutal as the music on this release. It consists of a drawing of a bloodied hand clawing through the neck of a character. You can see ligaments and flesh remain hanging on the head as the hand still scrapes, what we assume, all the way through as if it were a beheading. The blood on the album cover is accentuated by a contrast of a white and blue background. The album cover matches the music content perfectly.

I hadn’t heard anything this brutal since Enmity’s Vomit Forth Intestinal Excrement EP. As Wriggling Chrysalis of Metaphysical Grudge played on, I could feel the sound shredding through my eardrums and disintegrating my brain as I listened with a smile. Each and every song on this album is just as good as the next. I realize brutal death metal isn’t for everyone; however, if anyone is thinking about introducing themselves to the genre or one of their friends, this is the album to do it with. Any brutal metal fan would be pleased to have Urobilinemia's, Wriggling Chrysalis of Metaphysical Grudge, included in their CD collection. This is definitely one album that I will not ever forget experiencing.