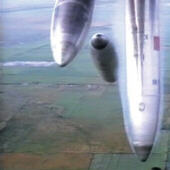 Something has got to be up when Montreal's nine piece band move the exclamation point in their name around so that it now reads Godspeed You! Black Emperor, whereas it was once Godspeed You Black Emperor! Exactly what the questionably pretentious nit-picking means is up for argument, but if we can come up with anything amongst the debris that was left from 2000's "Lift Your Skinny Fists Like Antennas To Heaven," it's that these instrumentalists third album, "Yanqui U.X.O.," is nothing short of amazing.

Yet again, GY!BE deal out a lengthy album (nearly 75 minutes, albeit 5 songs) of sharp, eccentric, original, striking, and moving music. "Yanqui U.X.O." opens up with the two-part '9-15-00.' The first part slowly expands upon it's minimalist opening, slowly building up until it reaches it's towering climax – a whirlwind of instruments and slightly audible intricacies. The second, a song that is but a fraction of the length, serves as a beautiful transition into the albums centerpiece, 'Rockets Fall on Rocket Fall's.' Possibly the most engaging of the five songs on "Yanqui U.X.O.," 'Rockets Fall' takes only minutes to reach its first gut-wrenching climax before it reaches its mid-section, a tenebrous segment that sounds like it could have been lifted from Martin Scorsese's "Taxi Driver" for it's lonely feeling and brass instrument interplay. The last two pieces on "Yanqui U.X.O." are equally as moving with their startling contrast of light and dark, myriad of emotions, and riveting crescendos.

Besides the renovation of their name, GY!BE managed to make a few other slight jaunts this time around, most noticeably the absence of their largely trademarked use of field samples in their music, an element that was used to set a tone or mood for their pieces. The songs, which still march forward in lengthy segments ('Rockets Fall On Rocket Falls' is slightly over twenty minutes), seem to make up for the time by a slightly more repetitious style, yet the pieces rarely, if ever, fall into tedium.

Bottom Line: GY!BE were the innovators of their orchestrated style of post-rock, they spawned a countless amount of mostly cheap imitators, and yet three albums from their inception they're still the leaders. Magnificent.