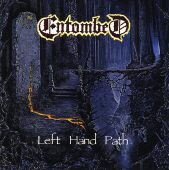 …man can destroy. Is this the ultimate line for a death metal song? Anyway, it's not too late to congratulate Left Hand Path on its 30th birthday. And which day of the year would be better suited for this than the darkest and shortest day of the year? Back in 1990, Entombed gave, at least in my student room, the starting signal into an acoustic adventure called (Swedish) death metal. I was not aware of listening to an album that would later be considered a reference work for Swedish death metal. But that the twelve tracks, some of them from the estate of Nihilist, resulted in a very strong record, was not to be overheard. Already the opening title track is a monument of monstrous proportions. Its equally brutal and partly fast-paced first half and the melodic-suicidal second half form an outstandingly punchy unity, where the guitars are bursting with power and at the same time keep presenting eerie melodies and fascinating solos. The quiet graveyard melody that introduces the second part has given me goosebumps for years, and in retrospect it almost seems as if the structure of the track was picked up for re-use on Necrophobic's sacrosanct "Revelation 666". The relatively abrupt break and the surprisingly melodic ending of this tune indicate that Joakim Sterner and friends might find Left Hand Path at least not entirely bad. Anyway, the title track marks, to push it to the point, the reference work of the reference work.

So while the opener is a two-in-one package, there are also plenty of straightforward, perhaps less ambitious but still stunning compositions to be discovered on Left Hand Path. 'But Life Goes On' (absolutely awesome), 'Drowned', 'Revel in Flesh' - tracks like these are more simply structured, live from their enormous intensity and heaviness and sound nearly too lively and fresh for a true death metal maniac. Of course, despite the said freshness, everything smells of death here, too, but just this paradoxical situation also lends the album a special spice. Whereby here of course also other factors are to be mentioned. The vocals of Lars-Göran Petrov have the necessary grave aura, but it is far away from the absurd roar and growl of some American death metal singers. Abandoning persistent inhuman articulation, he manages to contrast the words of his lyrics with the deadly sound of the guitars in a halfway comprehensible and properly emphasized manner. I always marvelled at not having a 'Bitter Loss' to complain about, so convincing did I find Petrov's vocals in the eponymous number.

A plus point of this debut was certainly its release date. Thrash metal had become a rape victim of its own forefathers and the second black metal wave was not yet sweeping through Europe. Not to forget that death metal was also still more or less in its infancy. Although Autopsy and Obituary in the USA had already caused a musical uproar in 1989, the national competition Dismember, Unleashed and Grave only hit the scene with their debuts in 1991. Entombed can therefore take credit for helping to define Swedish death metal (acoustically and optically, SeaGrave’s artwork precisely reflects the musical approach) - and last but not least there is a certain magic in (almost) every beginning, a spirit of optimism that inspires great deeds.

One of these amazing exploits is that all the songs on the full-length, without exception, develop their own identity. Despite the voluntarily chosen, narrow stylistic framework, the band and especially their guitarists manage to give each piece its own touch - without violating the homogeneity of the overall work. It's fantastic when 'Abnormally Deceased' is fired off at the end of the record with enthusiasm and riffs that are as efficient as they are excellent, or when 'The Truth Beyond' comes up with an unexpectedly catchy chorus. There is no question of a loss of quality throughout the entire work. Even the bonus tracks live on near-perfect guitar lines and exude a tangible, murderous lust. The fact that Petrov, whose voice occasionally appears with a lot of reverb, suddenly yelps with a dehumanized voice in the closing 'Premature Autopsy' after all, is the final surprise on a record rich in moments of genius.

Lastly, one could go into the production, but anyone who is even slightly interested in Swedish death metal should know that the gargantuan reputation of sound engineer Tomas Skogsberg and his Sunlight Studios was precisely built on releases like Left Hand Path (and “Like an Everflowing Stream”, “Into the Grave” and many more), because he gave them this thundering, deadly, sulphurous, voluminous, well-balanced and destructive mix. So once again, congratulations to this groundbreaking work that has withstood the test of time in a brilliant manner. I’m sure that albums like this one are the reason why the metal community and especially the number of reviewers have grown to the impressive dimension we have today. Thus, if you are a reviewer who was born on the 21st of December: congratulations to you, too. Keep up your good work and stay loyal, even if Entombed’s further evolution cannot be described with terms like loyalty or steadiness. But what man has created, man can destroy.