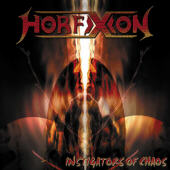 As if there isn't enough death/thrash acts coming out today or are already in existence, why not throw another one on top of the pile? While we're at it, we can make sure that they're somewhat second-class. This time it's Quebec's Horfixion. Their latest album, "Instigators of Chaos" is torn between decency, mediocrity, and downright atrociousness.

Horfixion aren't bad. Their musicianship, minus the drumming (Patrice Hamelin of Martyr fame), is all right, but nothing special. The actual music is ok. It's not something that will make you cringe, but it's not something to write mom about. It doesn't have what it takes to insight that aggressiveness in you that is much needed for this style. Therein lies the problem: Horfixion are just kind blah. When they're not sounding like Death, they're busy trying to sound like Slayer, and when they sound like neither, it just comes across as generic. Don't get me wrong. Many bands pass by doing what Horfixion does, but that's only because (hopefully) they have a little something more to offer. Maybe it's just their distinguishable sound, the power they put into their music, or the revitalization that they're doing for a style that's been long since beaten dead. Unfortunately, Horfixion just don't have any of that. I guess it's not really a surprise for a band that was originally called Horrific Illusion and main purpose was to cover other bands songs...

Despite the downside of "Instigators of Chaos," there are a few pleasant ideas here and there. The rhythm section leaves a little bit to be desired, but the lead guitar comes up with some catchy melodies here and there.

Bottom Line: Horfixion just don't cut it. If you really are a big fan of death/thrash ala Death and Slayer then I guess you might want to check out "Instigators of Chaos." For the rest of the world, we'll simply go on without it.