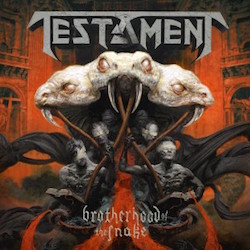 Brotherhood of the Snake completes the full dozen and it goes without saying that twelve full-lengths are a respectable performance, at least in terms of quantity. Better still, Testament have enriched the thrash metal movement with many jewels - but they also produced a lot of bullshit, stylistic infractions included. Every now and then, their outputs sounded pretty uninspired and tired. But the stamina of the formation (of damnation) is beyond doubt and just like a cat, they seem to have nine lives (or even more). Accordingly, the here reviewed album has some truly energetic songs. "Stronghold", for example, starts with a rebellious riff and its rapid verses deliver simply good, straight Testament stuff. The chorus picks up the opening riff and the part after the second chorus adds a melodic element without giving the song a totally new direction. The typical trademarks, Chuck's well-known vocals and substantial solos, are not missing as well. Ten tracks of this quality level and there would be no doubt that these brothers worship a snake that loves to bite and to spread its venom.

There are more songs that boast with a more than solid dose of currishness. "Centuries of Suffering" decorates itself with more or less the same components which make "Stronghold" to a great track. It mirrors a remarkable level of aggression and even though I must admit that there are also pieces among the remaining material which do not explode in the same way, I am pleasantly surprised by the power the album develops. Of course, the combination of names like Testament and Nuclear Blast guarantees a proper recording budget and professionals like Eric Petersen and Chuck Billy are able to make good use of the financial resources. The album sounds direct, tight and clear while avoiding sterility and lifelessness. There is nothing to complain in terms of the technical execution, while the material itself is also good, but not absolutely flawless. Testament have not been completely successful in giving each and every track its own individuality. This is no big deal, because all of them have something to offer and no slack acoustic sequences show up in order to dilute the material's vehemence. Nevertheless, the album lacks points of reference. Once again, this is rather an aside than a serious problem. So, let's have a look on this from another perspective: Testament, a band that has always been prone to mix in some ill-defined fillers, delivers ten crispy neck breakers without confronting the audience with the whole spectrum of its skills and its shortcomings.

Is the twelfth album of a band, regardless of its name, still exciting? Well, what's the alternative? Suicide is no solution, if I am not mistaken. Instead, I wish that comparable alliances such as Forbidden, Lääz Rockit, or Vio-lence would be still alive. A kingdom for a new "Through Eyes of Glass", "Forced to Fight" or "Bodies on Bodies"! So, welcome this album that avoids ballads and perpetuates the story of a legendary group from the Bay Area. Do not overestimate the attribute "legendary" or be aware of the fact that all legendary units have also released a lot of dubious albums ("Force of Habit", "God Hates Us All", every Flotsam and Jetsam album after "No Place for Disgrace" or "Leave Scars"). But appreciate the fact that Testament still (or better: again) perform more or less pure thrash metal, not in its wildest, but in a reliable configuration. Therefore, I am now waiting for the band to complete a baker's dozen next.

After a review of the previous album of Testament, Dark Roots of Earth, which rated 8 out of 10, some suggested that I am deaf; some suggested I should get a different job. Perhaps thanks to the Brotherhood of the Snake I will have an opportunity for rehabilitation?

Although 8 is still a very good rating (in case of Dark Roots of Earth rating is higher, due to sentimental reasons), apparently in the eyes of diehard admirers it was not good enough. Now I can only hope that fans of thrash, busy with everyday beat and online ferment associated with the new Metallica album, will not notice that once again we got an eight. As a justification I'll add only, however, that it's an eight plus because Brotherhood of the Snake seems to be the best album of the band in 21st century, so since the times of brilliant The Gathering. Moreover, compared to other albums issued this year by several other American veterans (Anthrax, Megadeth, Metallica or Death Angel finally), most of them well-received, Testament did, in my subjective opinion, the best job. In their style, which means working and not hanging around in the media and focusing primarily on blowing hot air into the promotional balloon.

Each subsequent Testament album over the last 24 years, so since the album The Ritual, was recorded with a different line up, so it is no wonder that this personnel carousel made itself felt on the Brotherhood of the Snake as well. The band, in an atmosphere of mutual unsympathetic accusations, relegated the original bassist Greg Christian, and his place was taken by old friend Steve DiGiorgio, who was in the ranks of the formation and wreaked destruction on the already mentioned The Gathering (and not quite full-fledged First Strike Still Deadly). Steve knows exactly how to work in a tandem with Gene Hoglan and you have to admit that his clanging parts were featured with appropriate force. No matter how much we praise the rhythm section however, it is well known that in Testament the cards are dealt indisputably by someone else.

On the previous two albums gentlemen Eric Peterson and Chuck Billy gave the impression of being quite weary from bearing the metal cross. They were not revived even with the return of one of the greatest magicians of thrash guitar, Alex Skolnick. Alex charmed in his own way, the riffs sounded like they should have, as if everything was in its place, but the concoction of the most characteristic elements of Testament's creativity somehow did not want to, unfortunately, take on the appropriate flavor. This time Chuck Billy focused on the lyrics solely and all the material was written by Peterson, only with a modest participation from Skolnick. Most importantly, however, it seems that with the Brotherhood of the Snake - although Peterson emphasized in interviews everywhere that the creative process was not the easiest – that 'something' that is difficult to even specify, clicked.

Brotherhood of the Snake is obviously one hundred percent Testament album and you can hear it at every step of the way, but for the first time in a long time, the formation presents a vitality that does not make the impression of being forced. The melodic inclinations were well balanced with aggression and typical for Americans lively gallops. Precisely, as in through a surgical incision, they removed almost all the tendency to idle humdrum. The solos enhance songs; they're not a forced – even if it is virtuoso – 'must' in the composition only. Only two of the ten pieces go over the five minute mark; the compositions, therefore, are no longer dragging, they're tighter, more solid and most importantly, they're finally starting to differ from each other.

On this last issue, obviously more could have been done and it is not yet the level of variety which would permanently drive out boredom, especially for the less diehard fans of Testament. However, after the two previous albums - monoliths, filled with twin tracks from which it was impossible to extract even one Top Pick, the band took a step in the right direction. Just to mention the shortest one on record, strong 'Centuries of Suffering', led by the main haunting theme 'Neptune's Spear' or 'Seven Seals' interspersed with great guitar solo parts.

A passion for a very modern, crystalline production that Eric Peterson and Andy Sneap provide is also a hallmark of the band, which recently resulted in excessive artificiality of the material. This time, it is better in this field also (or maybe I'm just telling this to myself?). Of course, there is no room for the slightest speck of dirt, but the production is - according to the declarations - a bit more organic, the tracks get a little more space. I now returned to the Brotherhood of the Snake more times than to the two previous discs combined, so it probably speaks volumes about it. Keep it up, gentlemen, and fans will never forget about you.