Where Fear And Weapons Meet 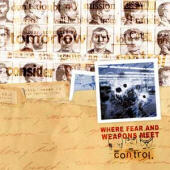 After a two-year hiatus South Florida’s Where Fear & Weapons Meet is back with not a full-length album, but a MCD simply titled “Control.” Their intention: to create some real hardcore. No more indecipherable howls, none of that Swedish influenced crap, and certainly not any of those ‘so-technical-you-won’t-know-what-hit-you’ leads. Nah, “The Weapon” isn’t about that. They’re about creating that traditional hardcore sound with that much needed modern edge, and you know what? It’s working.

There’s something about catchy songs with a heavy edge that gets the listener every time. It’s identifiable, and more importantly, it’s fun. “Control” is a good album to sit back and rock out to. The rhythm - guitars, drums, and all - leads the songs forward with its high paced, high-energy, and positive style. And what would a good hardcore band be without a vocalist – in this case Alex Roundhouse – that had that same energy as the music and the will to bring the listener right up onto the stage with them? Vocals are a big part of The Weapon, and Roundhouse’s “listen to me I have something to say” attitude is perfect for the part. When all of the band members get together to shout out some lyrics together, it really gives “Control” a great punk feel, which further pushes the traditional hardcore-ness of this album and the positive feel of things.

While “Control” is an MCD that only clocks in at around 14 minutes (yes, 14 minutes), it is definitely welcome by fans of a band that is coming back after two years. If The Weapon keeps pushing themselves at this rate, there’s no doubt that their absence will be put behind them and they’ll be able to jump right back into the scene.

Bottom Line: Traditional hardcore fans, this is for you.