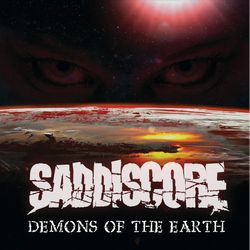 Type: Full-Length
Release Date: September 2nd, 2016
Label: Boersma Records
Genre: Heavy
1 A Storm Is Coming
2 Too Far Away
3 Mirror Face
4 Ghost Of Guilt
5 FSK
6 Demons Of The Earth
7 All In Our Hands
8 Mental Warfare
9 To Take The Blame
10 The Reaper
MetalBite on YouTube
MetalBite on YouTube

Saddiscore is four metalheads out of Germany, and Demons Of The Earth is their debut album. To break into the music market they've used 10 tracks lasting almost 43 minutes, and cooperation of the small German stable - Boersma Records.

Band themselves describe their style as modern heavy metal and I think there’s something to it. Elements of groove, thrash, and even doom are very audible and that was the diversity that got me interested. Heavy metal supplied by Saddiscore is different, but not bizarre in its uniqueness. Unfortunately it’s very clear they’re just starting out on their musical journey. Simplicity becomes unbearably obvious sometimes. Singer has this warm-raspy and attracting timbre voice, but sometimes he is not able to control the leanings learned from the heavier metal genres. Sometimes he lacks this powerful heavy metal manner, especially in the higher parts. If however, he fully masters his instrument in the future he can be an asset of this quartet. For now, however, he’s average.

Demons Of The Earth is an album that bears the typical mark of a debut. It reminds me a little, though not musically, of Slayer's Show No Mercy. The potential of that album already killed, but skills of the band and recording team established the status of the disc. An undeniable advantage of Demons Of ... are interesting, varied compositions kept in gloomy tone generally not of heavy metal kind, highlighting the band from all the hordes of heavy - warriors. Some tracks (A Storm Is Coming, Mirror Face, Ghost Of Guilt, Demons Of The Earth, All In Our Hands) have this mysterious "something" that despite that certain tang of the debut, make you want to come back to them. It seems to me that, with more hours spent in the rehearsal room, Saddiscore virus can gain more power.

This mix of genders and generations has created a heavy metal variation, which may please, but it needs more time and work. They were able to create interesting albeit very simple compositions. They brought a breath of freshness, but not without flaws. We just have to wait for more still.