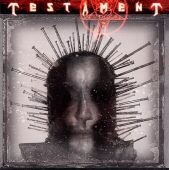 Please take pity on me, because I have listened to Demonic, the black sheep of Testament’s discography. Low average on most reviews speaks volumes, doesn’t it? Especially when taking into account that some appreciated review writers have a tendency to an inflationary scoring system, at least from my pessimistic German view. But frankly speaking, Demonic did not really annoy me. It’s different, it does not trigger an overload of emotions and one can start a discussion about the credibility of a band that suddenly discovers its affinity for death metal aesthetics. Moreover, I agree that some songs don’t work, for example the completely useless 'New Eyes of Old'. Nevertheless, my personal nadir of Testament’s catalogue is another album – and Souls of Black has really cemented its position at the end of the ranking.

Of course, the full-length breaks with the more or less traditional, technically oriented approach of the formation and it is easier to like Demonic if one does not belong to the group of people who wants music where the technical skills of the guitarists are oozing out of every riff, line and solo. The stomping quasi title track, simultaneously the opener, tells a totally different tale. It sounds clumsy and one-dimensional – but it also has a resilient bridge and it does not lack coherence. I also understand that some people spit on the vocals of Chuck Billy, because his mostly monotonous growling is an insult to his real potential. On the other hand, it doesn’t bother me and if you want to record an album at the interface of thrash and death metal, this kind of vocals is not inadequate.

The songs themselves come and go without having an enormous impact. Maybe it’s an irony of fate that they are – despite their generally vehement design – pretty harmless and lukewarm instead of “demonic”. However, the opener is okay and the same goes for songs like 'Murky Waters' (great beginning thanks to a cool riff, speedy verses). The mid-paced 'Hatreds Rise' is almost a little jewel with a more or less “normally” singing Chuck and, by the way, this song is not too far away from the typical Testament material. Additionally, the number of flops is not higher than on many other outputs of the legendary yet only rarely outstanding five-piece. So I see no reason to throw the album in the bin – and I rather forgive metal bands a flawed heavy than a flawed shallow or commercial album.

Do I need to say something about the production? Don’t think so, because Testament always had the financial opportunities to forge an appropriate sound and at least in this regard, Demonic marks no exception. In a nutshell, the here reviewed work did not deliver what we expected back in 1997 and its self-chosen simplicity lays itself open for understandable criticism. Anyway, it is no absolute stinker from my perspective.