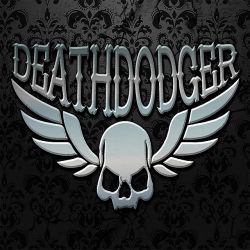 I have noticed something over the many years I have written reviews. The great state of Texas is a hidden breeding ground for some of the most uncompromising yet trendsetting metal acts out there. So many bands have blessed my ears with no-holds-barred riffs, rumbling bass lines with that no nonsense attitude. With that said, I give you a very nasty Texan trio called DeathDodger as a perfect example of what the lone star state has been brewing.

Combining the franticness of old school punk with the brutality of metal and then adding in some straight ahead classic stylings of rock - and all of it into one unit- that is DeathDodger in a nutshell for all to hear. DeathDodger is the might of crossover, amped up to the next level, reworked and unleashed on to a much unexpected world. One of the three favorite albums I had done to date.

The whole EP stands out as a labor of love for the band set to a masterful array of ruthless riffs and biting words. Each song seems to have been crafted to lop your head right off of your shoulders like a sharp broadsword can do. I love the witty lyrics with rabid riffing overload of 'Die Young', not to mention the aggressive punk shot of 'Invincible'. These tracks stick out as the bands introduction of themselves to the world… and they said it loudly as hell.

If you are a crossover metal fan or not, I bed that nobody can ever deny the power this three piece band clearly as in their music. If you cannot see it the band for who they are, you’re probably ether very tone deaf, have the IQ of dryer lint or listen to Usher. This is flat out fun mixed with musical might.

DeathDodger is a band that has found a formula that works well, and wants to bring it to the world one slam pit at a time. Book me a spot in that pit… I am fucking there.