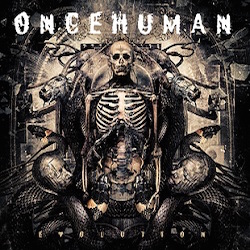 Once Human performs melodic death metal in the vein of Arch Enemy. In fact, upon first hearing the band, you’d be hard pressed not to think this was Arch Enemy performing. The vocals in particular sound eerily similar to that band and again do a pretty good job of making use of a female.

The music here is abrasive, but reaches a nice balance between the harsh and melodic. The music has a very addictive melodic aura that is pleasant to behold.   However, it brings the riffs and has a very punishing vibe as well. The combination results in an album that has enough variety despite being straightforward enough. This isn’t a perfect album, however. There is the undeniable feeling that this has been done before. When you take into account the Wages of Sin album from Arch Enemy, there is no doubt that what is here has been done better as well. This is still one of the better attempts at mimicking a style that I’ve heard. It works on multiple levels because both the melodic death metal and the vocals are largely the same as Arch Enemy. Since the instruments and vocals both share a lot in common with that band, there is a lot of different shades of the music that can be repeated effectively. Now there are some aggressive moments on here that overtake that band’s material and bring about a head-banging that is very welcome to behold. The music is hefty enough to really make for a thrashy experience.

Though it doesn’t fall into that genre, there are certain tendencies that make this also sound like a modern thrash release. The combination of all of these features makes for an interesting release. Make sure to check out Once Human and get on the bandwagon with Evolution.