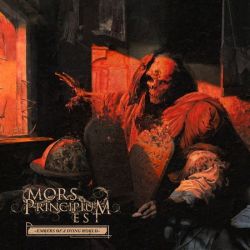 ::   ::
Type: Full-Length
Release Date: February 10th, 2017
Label: AFM Records
Genre: Death, Melodic
1 Genesis
2 Reclaim The Sun
3 Masquerade
4 Into The Dark
5 The Drowning
6 Death Is The Beginning
7 The Ghost
8 In Torment
9 Agnus Dei
10 The Colours Of The Cosmos
11 Apprentice Of Death
MetalBite on YouTube
MetalBite on YouTube

Mors Principium Est performs melodic death metal that displays the typical proceedings of the genre in recent times. There is that mid-paced groove that bands like Omnium Gatherum have present in their sound immediately present. This sound has come up a lot recently in the genre and has made for a mainstay for melodic death metal. The sound hits the sweet spot.

It isn’t too technical, but it’s indulgent enough to catch your interest. This makes for a memorable recording that one could still remember more than they do. It’s a balance that is struck and makes for a template that melodic death metal bands should base their songs upon. The problem is that Omnium Gatherum performs the style better than this band slightly. This leads to a recording that could be better, but that is still sufficient for the genre. The band has a good deal of passion, but could have more. They have the great riffs that are necessary for melodic death metal, but they could push further in interesting directions as well.

This all leads up to a recording that works well, but could have been better. I’m trying to push this band because their excellent The Unborn album still remains a mainstay for the melodic death metal genre for me. They have managed to make competent music since that album, but it doesn’t quite tickle the same nerve as that album did. The solid Reclaim the Sun is an early highlight and sets the bar for the remainder of the music here. The very last song Apprentice of Death is solid too. These tracks are never beaten later on and take precedence over the rest.

Embers of a Dying Sun is a very solid death metal recording that has a solid presence in this year’s crop because there haven’t been many releases from this subgenre yet.