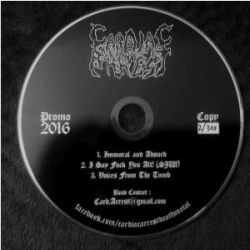 Cardiac Arrest is a Chicago quartet that seems bent on making every horror film nightmare you hold dear come to life. Coming off the brilliance of their last full-length, And Death Shall Set Your Free, the band issues a three-song promo / demo simply titled Promo 2016, but there's really nothing simplistic about this slab of ugliness. It's three songs of pure, unadulterated death metal from the very bowels of rancor and brutality, and that's exactly why these guys are one of my favorite metal acts of the modern era.

I can throw out a plethora of adjectives to describe Cardiac Arrest's overall sound: filthy, dirty, foggy, brutal, battering...and all would be viable assessments, albeit repetitive. Nevertheless, the band possesses a sound that is nothing short of a furious arsenal of volatility and strife that comes across perfectly in the music. I implore you to check out their other albums, as there isn't a bad collective in the bunch. These guys are the real deal through and through, devoid of pretense and phoned-in complacency.

The three tracks on this current promo are everything you could possibly want in a modern day death metal band. The vocals are throaty bellows that are clear enough to hold your interest, yet obstinate enough to blow the dirt right off the cherry-wood sarcophagus in a 100-year-old mausoleum. Musically the band employs amazing time changes and riffs that call upon the forgotten years of early forerunners like Grave, Autopsy or Incantation. There is also an underlying density to the tone without giving way to muddy production or lackadaisical effort. The mood throughout shape-shifts evenly between a dismal b-movie horror score and tempestuous soundtrack to a dimly-lit mansion on the outskirts of town, an imaginative process that is sorely missing in many bands today that rely too heavily on just the lyrics to carry the listener through the story. What a good number of death metal bands fall prey to is the one caustic sound throughout a track or album that seems so good and feels so “dark” that any deviation might lose something in elongated translation. It makes for stale, uninspired sounds and kills any album for me. Cardiac Arrest not only challenges that notion that less is more, they take it to levels of genuine fright and horror, and it never gets old or repetitive. All three tracks on this promo are just amazing, but it's the last track, 'Voices From the Tomb' that will be the classic tune in the band's repertoire. Simply stated, this is one the greatest death metal tracks I've heard in the last five years or so, it's that impressive. If this is what's to come for the next album, it is one of the most anticipated releases for this old fart.

Chicago has a long, if often undermined history in metal's expansive underground. We may not always get the credit we deserve for producing memorable, heavyweight metal bands, but not only are they out there waiting to be heard, they're lead by Cardiac Arrest's unapologetic cult of death-worshipers and grave-dwellers. Give these guys a good, hard listen!