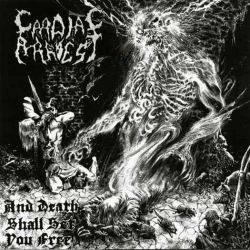 HEAVY! This is probably the most outstandingly produced Cardiac Arrest album I've heard and I've heard all of them. Just simple death rot metal, not just "death metal". These Midwestern monsters of the underground continue their legacy with their new release off of Razorback Records respectively. What to expect to give you what I've already enunciated in my brief intro is thick guitar riffs still in B-flat tuning (for all you metal guitarists) with slow, moderate and fast riffs delving deep in original songwriting fashion. Extreme old death metal influence among the ranks of classic bands such as Autopsy, Obituary but CA is in a league of their own!

Vocals feature actually 3 different blends that suffice to say here are uncanny, deep, amongst some screaming, but mostly deep growl. They fit the music quite well and it's good that they feature this variety because it keeps the albums' wit and unvaryingly thickness vibe that's pretty much all CA albums are encapsulated with. The first track "Prelude To Madness" segues the album into a quite astonishing mass of riff writing that I've to touch more upon musically speaking. The prelude may seem monotonous, but I think it was on purpose because this segue gives you a sense that these guys will never give up their roots and continue to stay amongst the darkened pit of destruction of metal underground they've always been accustomed to.

To touch on their musical progression, it seems that the production quality made it easier to discern what is actually going on with these guitars. You can hear  pretty much everything, the bass too if you're listening very closely and their style hasn't changed, but their originality in musical composition seems to be what is at the root of this album. They've always been strong on their songwriting capabilities, but this one I think is the heaviest and most catchy writing style. They seem to put together a fresh new chunk slabs of riffs together with a maximum amount of distortion and bar chord/tremolo picking onslaught of axes that totally annihilate!

Frontman Adam Scott still shredding on lead guitar properly placing his varying arpeggios, sweeps and tremolo picking behind Tom Knizner's rhythm efforts that both Adam and Tom successfully correlated these collective pursuits here. The death rot/death metal community should embrace this album because of it's heaviness, uncanny blast beating, tempo changes and darkened aura of mood. This of course is alongside a band that just simply dominates for the reason that their devotion to the underground scene is just never going to cease (this I predict is until they retire). People that refuse to compromise like these guys should be the ones that deserve praise not like many other metal bands that retreat from their roots just to sell records. CA should sell a ton for the sake of refusing to abandon their unrelenting desire to stay HEAVY.

If you want to hear what death rot truly is And Death Shall Set You Free is equipped with all incorporated style of precision recording quality, drum work with blast beating intensity along with precise double bass/time signature changing. Guitars that are just so damn heavy they'll destroy your speakers, vocal variety domination and screeching leads to the point of eardrum explosion. This band continues to dominate the death rot/death metal music core of Chicago's underground music scene. You won't hear anything except sheer dominance of a performance and hope that they'll continue this onslaught throughout their days. So grab this CD metalheads to embrace the horror/destruction they've obliged listeners to hear with outstanding songwriting capabilities proving that metal is definitely alive, well, and undying.......