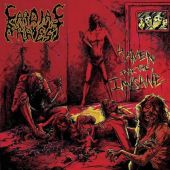 This band's genre is vintage death metal with guitars tuned to B-flat and leads displaying Adam Scott's talented mix of arpeggios/tremolo picking/tapping. The songs are energy filled with mostly fast tempos, but also with milder parts, which are few and far between. The music displays riffs that are chunky/heavy with a huge load of distortion. There are some instances of melodic sounds, but mostly a deep blend of tremolo picked parts and chord progressions. Tracks such as "Insanity's Grip", "Rage on...Fuck Off" and "Affliction of the Beast" are good songs to hear for a bit of what this album is like. I enjoyed all of the tracks, but there were some songs that were more memorable than others. I like the heavy sounds which resemble a great deal like that of Dismember, Napalm Death and Morbid Angel influenced style of death metal.

The production is a little flat sounding, but overall, it's solid. I still think that the band's debut full-length release entitled Morgue Mutilations has a better production sound to it. Nevertheless, Haven for the Insane sound wise contains a good mixture of all of the instruments, especially the main guitars. The vocals altogether are a blend of mainly burly spewed outputs with other backup high end screaming which is heard on a few songs. Lyrical content contains themes such as horror worship, gore and zombies. However, on the insert to this album, there are no lyrics that were published. On the band's older website, there were a few songs from their debut EP that the band made the public known what their topics chose to be on. The lyrics go hand in hand with the music because it backs up their overly heavy amounts of raging death metal. There are no cover songs on this release, but the track entitled "Haunted Remnants" was re-recorded on this full-length.

Overall, Haven for the Insane is probably my second favorite album by the band. At present, Morgue Mutilations is undoubtedly a classic and Cadaverous Presence also is a strong output by the band. The vocals, guitars and drums were all highlights displayed here. My only complaint was the production, which was a bit flat sounding, as I previously mentioned. If you want to hear some gruesomely heavy and unrelenting death metal, this release is a must by all undying extreme music fans.