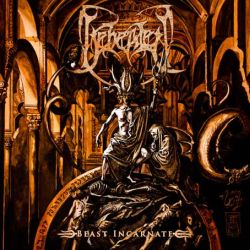 Beheaded perform a ferocious take on death metal.  There is a bludgeoning approach that reflects the best of Behemoth, such as their Evangelion album.

This is a workmanlike approach to death metal and it is reflected in the pummeling riffs of the band.  In terms of performances, the guitars have a powerful nature and the backup drumming is stylish and similar to Behemoth.  All in all, this band plays a style to a very high level and is very effective at portraying this style.  However, there is an empty feeling when comparing the band directly to Behemoth’s best material.  They don’t match the best of that band, but do a good job emulating them.  Beheaded feels like a backup band to them, but this is still a really good album of the style.  The guitars are memorable in a buzz-saw like fashion.  One will become entranced in the heaviness and power that the album holds.  It is simply a fiery beast of a work that will win over even the most lackadaisical of listeners.  The monstrous nature of the album permeates everything and makes for a strong work.  When compared directly to the band they idolize, these guys do fall a bit short of the best of that band.   Riffs will pummel you over the head, but don’t completely rule over all like the best of Behemoth.

Instead, there is a mid-paced medium that is reached where the band play within their own niche, but don’t overtake the masters.  There are many strong moments, but the final track Punishments From the Grave stands out as perhaps the best one, with a strong solo and bridge section that shines through towards the end.  It’s a nice way to close off a solid album in Beast Incarnate, that has strong death metal currents running through it.