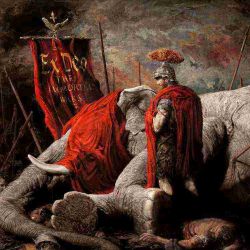 This features a killer performance from members of Kataklysm.  The music is heroic and melodic at different times.  The melody makes it akin to something from melodic death genre, though it certainly isn’t from that.  The Immortal Wars is more of a pure death metal release even though at times it sometimes recalls more the symphonic death genre.  The variety of musical stylings at play makes this a consistently enthralling release that constantly pushes the envelope and moves forward at a nice pace.

There is a sense of purpose in whatever the band does, however, and the music seems almost uplifting overall.  There is certainly an impassioned vibe to be found here and it permeates every note of the release.  One only needs to investigate the first track The Rise of Hannibal to discover this passion.  Musically, the band can be dissected a follows.  The vocals sound similar to Kataklysm’s, but the guitars are more epic in nature and suit the symphonic style.  Drumming and bass work nicely fills in the background to the rest of the music.  There are some horns and additional symphonic instruments that make an impact as well.  The entirety of the instrumental performances makes for a vibrant recording that has a lot of energy.  The music picks the person up and puts them in a positive mood.  It is still death metal, however, so does the music have power?  It certainly does.  Sometimes the songs are a little too ambiguous about the style they want to perform and thus the album loses a little in terms of focus.  Still, there is more than enough drive in the songs to make them obtain the heroic flavour they want to.

Ex Deo could be comparable to something like Septic Flesh and the atmosphere is decidedly more similar to that band.  Overall, The Immortal Wars is a very powerful death metal release.