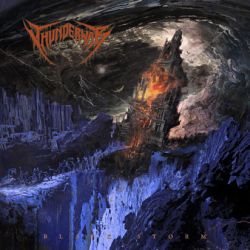 Thunderwar are four young guys from Warsaw, who decided to embody their musical adventure, and Black Storm is the debut album consisting of 8 songs. Although I became the owner of a two-disc digipak edition (second CD - The Birth Of Thunderwar), this review will be devoted exclusively to their first full-length album which leads us through nearly 44 minutes of well-known death metal paths going through somber, melodic black metal woods. Enough of verbal curlicues let’s get to the music.

The album was recorded and mixed in the Wiesławski Brothers studio. Not enough? Well of course it’s not because after all it wasn’t them creating the music, but the name brand and reputation definitely helps! What they’ve accomplished this time around forces to a profound bow. It’s transparent, clear, and at the same time harsh sound distinguishes Thunderwar amongst other death metal productions made by Hertz Studio. Coming back to the point, Black Storm doesn’t have much in common with actual storm but the ‘Black’ fits in here like a glove. Death metal played by this quartet is marked by fairly strong stigma of melodic Scandinavian black in the likes of Dissection. Vocally however it's a different story, because screams of Kamil "Madness" evoke associations with John Tardy and Martin van Drunen. It should also be stated clearly that these are not some inept attempts of imitation, but shouted out anger and aggression of true metalhead.  Solos that are played here by Witold Ustapiuk are a strong point of the band as well. Even if the darkness of boredom and predictability envelops the listener's feelings for a moment, then the glow of spatial solos animates the whole thing back to life. We have a good atmosphere here, interesting melody topics, but it seems to me that some songs were too overly expanded. Sometimes it would be better to finish a tad earlier. Black Storm will not conquer the world and it will not shoot out those four dudes from Warsaw to the tops of the metal charts, but should give them enough of a kick in the butt to hold their heads high and to start working on the next album. Gentlemen, there is no shame, and the shield is still in your hands! And, at the end, a few titles that made the greatest impression on me: opening bit ‘Marvel At My Sins’ with slightly nostalgic guitar introduction, the most dynamic – ‘New Age Prophecy’, gently borrowing in its construction from younger Amon Amarth – ‘New Messiah’, diverse one with a chorus which drills your head – ‘Path Of The Aghori’ and a bonus, a little bit different, more aggressive – ‘Iconoclast’ - (well done Vit). Let’s remember, however, that what one likes the other despises. Is this record a must have? Look for the answers yourselves. It is certainly worth to find it and give it a listen. Not only I do not regret the purchase but I suggest keeping an eye on this band because the ideas and capabilities are definitely there!

Black Storm is a publication worth of sin and the seriousness of Thunderwar plans speaks for itself: the choice of studio and engaging Elirani Kantor (Hate Eternal, Incantation, Testament) to work on the artwork. Serious stuff! Aesthetics of digipak edition is slightly old-school (in vein of Metal Blade in 80-90’s), and indicates that those rookies know exactly what they want since they’ve talked Witching Hour Prod into delving deeper into their pocket. Professional approach can be felt already but how will things go further in their musical fate? We have to wait to find out and we need to observe the quartet, because even though the Black Storm isn’t a great piece of work, but it definitely is a noticeable warning sign.