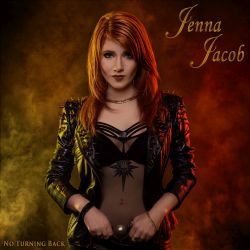 Germany's Jenna Jacob has tapped into a metal sub-genre that has been criminally rife with overcrowding and inanity over the last decade-plus. That said, upon seeing her influences and hearing two tracks she graciously allowed me to hear before her first EP No Turning Back made its debut earlier this year, I was intrigued to hear what she was offering. After all, her credentials are beyond impressive; she's an intelligent, well-spoken woman that is driven and focused in all of the right areas, not to mention the lady has also trained in classical guitar, orchestra, music theory and piano, so what's not to explore here?

The five song EP / demo more or less gives you a peek inside what Ms. Jacob is offering, and that's, quite simply, hard rock / heavy metal that borders ever slightly on melodic power metal in its basest form, and that formula is precisely what works to her advantage. When I first heard her voice, I immediately thought of a vastly more tangible hint of Amy Lee mixed ever slightly with a mid-range Doro Pesch in tone and overall quality. Please don't dismiss her if you don't like Evanescence; there is no strong, long-lasting comparison between the two singers. Lee's pretentious, overly-consuming efforts are usually only viable in small doses, while Ms. Jacob keeps her range within reasonable confines (both impressive and well-controlled) and manages to entertain to a very high degree. She doesn't need to rely on ridiculously overrated operatic vocals or mock mall-dweller growls and screeches; what she is able to do she does very well, and that is to keep her strong, mid-level range exciting enough to showcase her talents and nestle quite comfortably in the cradle of straight-forward metal for the traditional masses. The German accent is just subtly audible, but its presence is just enough to flavor that European power sector of the metal universe, leaving no doubt as to what is still going on overseas while we continue to stave off the mundane AOR hell of the United States. I've no doubt that if her music was to be played on any given hard rock or metal station here in the States, she'd go over quite well with the power metal masses that still enjoy a good rocking tune or a clean, even ballad. Too bad there's too much “dumbing-down” here to take any real notice.

The band Ms. Jacob assembled for her project handles her vision quite nicely. The songs shift between the aforementioned power metal and basic hard rock that doesn't sloppily trip over one another, thereby ruining the flow of the EP. She is in search of a permanent band for future recordings, and I've no doubt she'll accomplish her goals of becoming a known entity in the metal world. As a guy that is not a fan of keyboards per se, the keys in 'Double Deal' sound so much like Stratoravius that it's an impressive, albeit probably accidental nod that caused momentary spurts of finger-keying on my battered old desk. Often times we're too engrossed in the soaring, overpowering flair of pedantic and grandiose musical experiments that lose any musical integrity in the mire of a large production. There is none of that here, as it's about as stripped down as it can get without losing or sacrificing quality, and in terms of production quality this EP is very well-produced all over. More bands should employ this sort of care with their million-dollar home studios that often fall flat somewhere between extended vacations or hiatuses.

Check out Jenna Jacob on Facebook or her website if you're interested, and if you're a fan of this style of metal music, then there's no reason you shouldn't be.