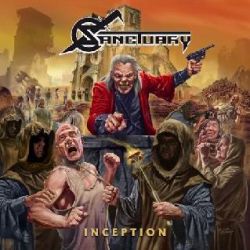 Back in 1988 when I first heard Sanctuary with the record Refuge Denied, I recall I was impressed with the heavy / power style they were dealing out without much repentance. I also distinctly remember telling my friend that the mix was horrible, vainly trying to adjust the EQ levels on my stereo (oh, how young I was!), but once I saw who produced it, it sadly made sense. Seeing them open for Warlock and Megadeth later that year saw my interest in them pique a bit more, but, admittedly, I wasn't totally blown over backwards then, nor when the follow-up Into the Mirror Black came out, which is my eternal discredit. It wasn't until I discovered Nevermore years later that the majesty of Warrel Dane and Jim Shepard became all too clear for me. Then it was like a world of wonder and brilliance just allowed me casual entry. When I revisited the Sanctuary material after that, I came to realize just what magic was contained therein, and I've not looked back.

The newly-reformed Sanctuary dug into its vault and found the old demos to that masterful and sonic- challenged debut and called it the aptly-titled Inception, and while I would usually cry foul at such an obvious cash grab delivery, this is one album that not only deserves to be heard in its naked form but heralded as a “what might have been?” moment in the annals of metal history. It truly is amazing what a bad production can do to a release. If nothing else, let Inception serve as a stark musical reminder of what not to do when recording and mixing a record. All I can say without gushing like a little girl at her first dance is grab this one and finally hear the TRUE Sanctuary, warts and all. As a teenage tape trader back in the mid-80's through the late 90's I was sent three of these tracks tacked onto the end of a tape to fill up space, so I was elated to hear some lost tracks from these sessions, albeit in generated fashion. I gave up the notion of ever hearing anything of the other demos, but, in the age of all things old being new again, we only stand to gain from such excavations.

Utterly unpolished and heavier than the actual released tracks, Inception provides a glimpse into the 1986-87 demo sessions that would eventually “produce” that first album. As accustomed to those original tunes as I have been for nearly 30-years, I can honestly say that I think these versions are not only musically superior in style and sound, but they showcase a band that was more concerned with the heavier side of metal. In the compare / contrast mode I'm in, I think that the original performances now appear rushed and overly focused with Dane's high register (a feat he himself has more or less admitted was for the sake of getting a higher pitch than his contemporaries like King Diamond). The track 'Soldiers of Steel' is slower, heavier, packs more of a wallop, and Dane's voice is strong without embellishment. When I say it's like hearing a brand new band some four decades later it's not just empty words. These demo tracks may be unfinished and not to the band's liking for whatever reason, but the style presented here in its primitive form is unequivocally brilliant and buries the Refuge Denied versions, hands down.

The music for the tracks we all know, such as 'Die for My Sins,' 'Death Rider,' 'Ascension to Destiny,' 'White Rabbit,' 'Veil of Disguise' and the staple 'Battle Angels' is, in every acceptable facet, heavier and less polished, particularly 'Battle Angels,' which is far more engaging than the the album version. It's almost as if the band was influenced by the current bands of the time, ala Helloween or a newly-emerging Blind Guardian (before they discovered those evil keyboards), and just dismissed the slower power hitting for the sake of the speedier metal that was desperately trying to remain relevant in the face of hair and glam bands permeating MTV. 'White Rabbit' is just phenomenal in its purest form, showcasing Warrel's soaring vocal espousing the virtues of the hookah without attempting to cause muscles pulls by overdoing the notes. When the CD goes into the next track, 'Ascension to Destiny' it's as if the proverbial light has been shone upon my ancient stereo setup, not to mention the thick guitar tone in 'Die for My Sins' that is just crushing. The band took such pains to tap into the heavier side of the metal spectrum, and if your ears and passions are so inclined, you can hear exactly what went wrong when Mustaine took over the controls and ruined that album.

Added on to this release are two lost tracks, 'Dream of the Incubus' and 'I Am Insane,' which is always a treat for us fans that not only enjoy a good archaeological dig but relish a new discovery of long-lost gems covered in dust and ever-changing musical styles from year to year. The tracks are solid all over, but I can see why they may have been left off of the original album. They didn't fit the flow, particularly 'I Am Insane,' which makes for a good B-side. In fact, I would think this track might have fit better on the Into the Mirror Black album, but leaving it left out of the fold completely is understandable. Nevertheless, it's great to hear it all of these years later.

Metal fans of pure blood and passion will hear any given band some decades ago and move on with new and exciting bands that pop up along the way, but we still get excited when something like this emerges for public consumption. It sure beats the hell out of endless greatest hits and best of packages that are both insulting and obvious ploys to subjugate and rob the fans. Usually when you hear demos they're just pale blueprints, unfinished and often cringe-worthy, but all I personally hear in this release is magic that lay untouched and criminally neglected for too many years. This is must-hear for anyone into the band or Nevermore; hell, this is for anyone into real metal music with conviction and attention to detail, even in the demo stage. Sanctuary should have been far more popular than they were. I blame bad timing and a fickle fan base easily lead astray by the Poison epidemic.

The Norse had the rat plague...we had Brett Michaels.