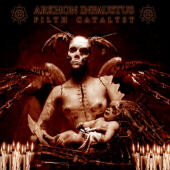 I have never really considered France a black metal powerhouse. No disrespect, but not much very good metal comes out of there. Nevertheless, I’ll be damned if I’m not impressed by France’s Arkhon Infaustus. For a while now I’ve been quite a curmudgeon when it comes to black/death metal. I prefer something a bit out of the norm or a bit more avant-garde, but I can really appreciate something well done. Now let’s get one thing straight - Arkhon Infaustus are a black/death metal hybrid band. It doesn’t really bother me though. The music on “Filth Catalyst” is enough to put that thought aside.

“Filth Catalyst” is more like ¾ black metal, ¼ death, and because of that, you’d better hope that Arkhon Infaustus could pull some type of atmosphere out of their music. Consider it done. The atmosphere is the filth catalyst of this album. It’s completely blasphemous and enshrouds the listener with feelings of horror. On the other hand the presentation of it all also helps with that. Just look at the cover! You’ve probably picked up on the fact that there isn’t anything nice about Arkhon Infaustus.

As for the music, nothing more can be said than that it’s well composed - simply, but effectively. The pace of this album doesn’t let up one iota the entire time. The drumming of A.ZK6 is an unstoppable wall of cacophony. Being a black/death hybrid, we mustn’t forget the mix up of both vocal styles. And last but certainly not least, both Deviant and Toxik’s guitars tear things up in a black metal way with a few slightly technical leads along the way.

“Filth Catalyst” may be doing little in the way of stretching the limits of black and death metal, but Arkhon Infaustus do what they do in a way such that it has the power to make any fan of either sub-genre be proud. I find it nigh impossible for such a fan to not be at least slightly moved by songs like ‘Nox Microcosmica,’ ‘Hell Conquerors,’ or ‘Criminal Deities.’

Bottom Line: Arkhon Infaustus have done more than a good enough job in creating a well-done black/death metal album that while not exactly going overboard on originality, really helps to put black metal off to a good start in 2003.