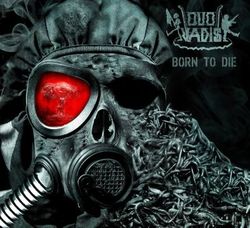 Succes! With the support of band admirers, the long-awaited ninth child of Szczecin thrashers saw the light of the day. Ten, in most cases fairly complex, compositions supplies us with 50 minutes of entertainment. We're still dealing with a well-recognized Quo Vadis feeling where dynamic thrash with a delicate touch of death metal prevails, but there's also a large dose of melody and so-called progression. At the end of this lengthy introduction, a significant note about line up, Cimas was replaced by the Brazilian - Ian Bemolator on guitar and Borel on drums by Sajmon, although the drums on the album were still recorded by Borel.

The band has benefited from the knowledge and experience of Wieslawski brothers again, giving them material for mixes and mastering. It seems to me that this selection is satisfying not only for the musicians, but also the audience. Sound wise, as in the case of most products with a stamp of Hertz Studio, the goods are first class. But musically? Hmmm, I am convinced that the discrepancies in ratings and assessments will rather not run out. I myself get different feelings about the album after listening numerous times. The undeniable advantages are: thematic and vocal richness, spatial solos, choruses and all other add-ons, as well as melodies that are sometimes getting close to being a radio hit. But as it happens with a sword – it lashes in both directions - what some consider a plus, others consider a downside or perhaps even a heresy.

Objectively, however, it should be noted that what Skaya is doing with his voice on this album – from whispers, grunts, recitation, black metal screams to growls moves him up to a higher league. The thematic variety manifests itself in the fact that what we’ll find here is typical for QV political rolls like the 'Orient Express' or 'Dwuglowy Orzel', as well as psycho-social bits as 'Abel and Cain', and 'Wino i Sól', but also almost soccer fan song - 'Quo Vadis II', a tribute to the deceased king of metal rock'n'roll - 'Motorhead', gushing with eroticism - 'Hiroshima', and even grotesque vampirisms - 'Beauty Of The Lake'. For doing this review especially I've listened to Infernal Chaos twice and I must recognize that the ninth album of Szczecin quartet is a significant step forward, but not without a drop of tar. While Born To Die is a dynamic album, this dark, aggressive thrash jagged edge from the previous release was slightly (keyboards, backing vocals) smoothed out. Is new Quo Vadis album worse because of that?

I will leave this question unanswered and encourage everyone to check out the album, if only to have their own opinion about Born To Die. Guests invited to perform on the album also add positive value to it. I will not name them all, but I cannot ignore the vocal end of the piece 'Hiroshima' performed by Maja Konarska (including the Moonlight) which sends shivers down my spine! Graphic design went back to Marek "Puff" Jastrzebski and he didn’t disappoint, invitingly looking digipak with 12-page booklet winks at the potential client. The album will certainly be easier in the reception of Poles due to the predominance of Polish (7) to English (3) lyrics, however, at the present time, when there are no less exotic Swedish or Serbian vocals used out there, this should not be a problem. To conclude this review I’d like to point out my favorites: very energetic with an interesting breakdown 'Abel and Cain', death / thrash - 'Born To Die', thrash/ rock - 'Hiroshima' and 'Bóg Postanowil Odejsc' ... with an interesting drum line. After a moment of reflection, allow me to conclude that it was a good thing that Quo Vadis dared to record more progressive album.