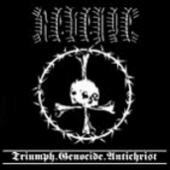 The minute I came across Revenge's "Triumph. Genocide. Antichrist" I grabbed my head and shook it in discomfort. I knew what I was getting into, and it wasn't good. Maybe it was wrong of me to just assume that Revenge would be your typical cult black metal act, but I was right, Revenge are that 'typical' black metal.

Reminiscent of the early black metal acts ala Bathory and Mayhem, Revenge play straight through eight monotonous and predictable songs. The difference between those two bands and Revenge is that Revenge has no discerning characteristics coming out of their music. It's simply one tempo throughout the whole album with only a few minor mix-ups. The production is absolutely horrible and not to the benefit of Revenge. There is no atmosphere here, unfortunately. You're not going to get anything truly chilling. Not even slightly scary or disturbing. Revenge just fails at everything. There are absolutely no dynamics to any of the songs either. It's just one straight shot all the way through "Triumph. Genocide. Antichrist."

The only thing scary about "Triumph. Genocide. Antichrist" is that a few guys were serious about this. They should probably just proclaim it as a joke and sneak away without feeling any burn.

Bottom Line: Dig cult black metal? Go find something else. Revenge need to teach themselves a lot of things before returning with another album. Excuse me while I go listen to something that does the trick.