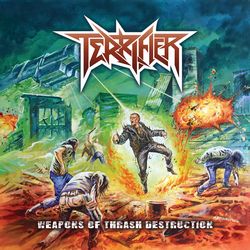 Even a stubborn guy like me is able to enjoy different genres. Black and death metal, hardrock (Malcolm Young - rest in peace, you will remain unforgotten), traditional metal, power metal, some punk bands, crust, grindcore... But if I have to vote for only one style, it is definitely thrash metal. No, not every kind of thrash. The pretty controlled approach of bands such as Testament is not bad, do not get me wrong. Nevertheless, the real essence of this genre does not consist of a mix of carefully considered parts and some speedy eruptions from time to time. The true character of thrash is shaped by fury, high velocity and rampant energy. Terrifier from Canada (but not from Quebec - I had almost forgotten that there exist Canadian metal bands outside of Quebec) deliver these elements in abundance. The five guys belong to these agile people who simultaneously jump with both legs into their trousers. They fear nothing but stagnation. Okay, they would also fear silence, but they have never experienced this state (and they do not know the meaning of this word as well).

Weapons of Thrash Destruction is, despite its brightly colored zeitgeist artwork, a breathtaking work. What kind of multifunctional weapon is this? The restlessly attacking riffs indicate a very well sharpened knife, the drums make the listener think of a machine gun, the solos are like cluster bombs and the overall impression is comparable to an atomic explosion. Only lead singer Chase Thibodeau does not know his exact role in this inferno. He combines insane hysteria with hysteric insanity, and I am undecided whether he is perpetrator or victim. However, his robust, more or less natural voice also possesses a manic element, but this is no unique feature of this guy. Fortunately, the entire band seems to "suffer" from an overdose of motivation. Consequently, the album spreads the vibes of classics such as "Bonded by Blood" or "Forbidden Evil" without lacking authenticity or freshness. The crisp riffing embodies the aura of the early days of thrash perfectly. These elastic yet vigorous, minimally melodic yet flogging riffs make me feel younger, less sniveling and (nearly) attractive to the opposite sex. This is not to say that Terrifier play a somehow female form of thrash. Tender, humorous or harmonic parts have never been heard in the group's rehearsal room. The five-piece is focused on extreme speed and a nice dose of viciousness. The more I think about it, the more I am convinced that there must be a spiritual connection between Exodus 1985 and Terrifier 2017.

Some albums that hold great music come with a less concise production, but Terrifier's second full-length does not fall into this trap. The material benefits from a perfect sound. This is exactly the way thrash metal has to be recorded. I really have no idea how to do it better. Okay, this is no surprise, but I bet that a lot of experienced sound engineers will also see no room for optimization. Aggression, vehemence, clarity and determination characterize the sound. Once again, the aforementioned debuts of Exodus and Forbidden serve as pointers and this is definitely a good thing. Only those of you who see their pure underground dogma crumble as soon as a production lacks fuzziness can stay in bed.

The album is filled to the brim with fanatic thrashers that herald the domination of the old school approach of the genre. The lyrics deliver the usual stuff. Dark scenarios are provided in abundance. Only "D.A.F.", which stands for "drunk as f**k" refuses to play by the rules. But this does not mean that the track suffers from a boozy touch. Precisely lacerating guitars form a vehement thrasher with a surprisingly catchy chorus. Do not be irritated by this. Catchiness is not the dominating feature of the material. Sharpness and resoluteness rule the sound of Weapons of Thrash Destruction and I also have to mention the extremely high degree of coherence that ennobles the individual compositions. There are no parts on this album that meander aimlessly through the concrete jungle of urban thrash. The song-writing talent of the guys is remarkable, and the galloping, cutting or shredding guitars create an enormously dynamic overall sound. In addition, each and every tempo change is brilliantly executed.

It is therefore only logical that the musical content leaves almost no space for improvement. Especially the second part fascinates me (although tracks like "Re-Animator" or "Deceiver" are phenomenal as well). "Bestial Tyranny", "Sect of the Serpent" and the already mentioned "D.A.F." are simply perfect, only the short instrumental on the eighth position does not deliver the extra portion of excellence that separates impeccable songs from simply good ones. With that said, allow me a personal comment: I was glad to find Terrifier's second album, because it is a top-notch choice for my nine hundredth review. Number 1.000 is not too far away, but even better and definitely more important: thanks to bands such as Battery (Denmark), Speedrush (Greece), JT Ripper (Germany), Eruption (Slovenia), Surge Assault (Italy) and, of course, Terrifier, the future of honest thrash metal has already begun.