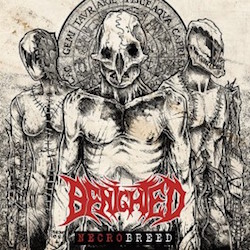 The day has come, finally! Been waiting to sink my teeth into this for a while. It's easily my most anticipated album of 2017, so let’s get this started.

As some of you may know, the band dropped a few songs before the initial release, "Versipellis" being one of them. I loved what I heard and naturally wondered if the rest of the album could hold up to that track, as it's quite a bold statement.

Benighted are one of those bands that don't like to hold back and usually go all guns blazing, so I was a bit surprised when I heard that this album had a short intro to it. No matter, the band quickly get down to their business of kicking your face in with a devastating assault of guitars, bass, and drums. Goddamn. It's been 3 years since their previous effort, the equally fantastic Carnivore Sublime, and the band are once again out for blood.

Not much has changed since their previous offering - the band still display multiple vocal styles, which is a bit of their trademark. Heavy as fuck guitars and insane drumming throughout will not dissatisfy you. Speaking of drums, the band welcomes veteran death metal skin blaster Romain Goulon to their ranks. Known for his work in Disavowed especially, he's a welcome addition to the fold, as you'll have quite a hard time finding more experience on the skins than this guy. So, the drums are well and truly in good hands (and very fast feet)

There's just something about Benighted that makes me smile. Like the intro to "Leatherface" features a sound clip from the movie "Commando", which is just undeniably badass. Their style of metal is also very creative I find, they don't like sticking to the same thing, or even the same style, for long. They like experimenting and they do so admirably, without sounding like they are all over the place. It's all blended together so smoothly and expertly that all I can do is sit and nod my head in appreciation of what these guys are doing.

There are some mellower moments on the album (not sure if exactly mellow, but mellow by Benighted standards, meaning not absolutely batshit crazy) such as "Monsters Make Monsters", which isn't afraid to throw in a nice abstract mid-section, and also a guitar solo. Speaking of guitar solos, don't come here expecting lead work. That's not what this band is about. This band is about rattling the calcium right off your fucking teeth.

Vocals are absolutely top notch. I love the screams, yells, howls, pig squeals. Fuck, Julien Truchan and Pierre Arnoux are fucking beasts. Some of my favorite vocals in all of metal, right here. The guitars sound nice and thick and clear, as do the drums. Thankfully, they're not triggered to sound like a type writer - they still sound like drums. The bass is also nicely in the mix, maintaining the foundation for this madness.

I almost jumped with joy when I saw that the deluxe version had a cover of Marduk's "Christraping Black Metal" on it. Let’s face it, while I love "Panzer", the mix and sound were never really that great, even though the tracks are legendary. Here, it sounds like... oh my. You kind of have to hear it to know what I'm talking about. In short, it sounds like the end of the fucking world. It also has a cover of "Biotech is Godzilla", which is equally a "holy shit what the fuck just happened" moment.

I absolutely love this. Benighted is the only metal band I wish I was a part of. This shit is fucking immense. Definitely a must in your collection.

Benighted play a very visceral form of death metal.  The type of go for the throat method of performing is influenced by Carcass, but taken to its own unique places with Necrobleed.  The songs are brief, but make a huge impact with the ferocious guitars.  Speaking of the guitars, they sound as abrasive and hard-hitting as possible here.  The goal is to make these short song excursions as punishing as possible.  The songs are also somewhat guttural, featuring a singer that sounds somewhat like a pig.  This adds to the atmosphere and makes for a greater overall impact.

Despite the ferociousness present this is not the best the band could do.  It doesn’t have the complexity of something like Necroticism and thus in the future, I’d like to see this band try to up the difficulty of the songs their performing.  It would be nice to hear a twisting and changing nature to the songs that would make them more compelling to listen to.  As it stands the fast and visceral approach works for the band, so why not utilize it?  It just that it seems to be limiting the amount of things the band is capable of.  They never seem to be pushing boundaries, but seemingly only try to work within them.  This leads to a furious form of death metal that is convenient to the band and performed to a solid extent.

This band reminds me strongly of Aborted and likewise that band seems to be performing within boundaries as well.  The two bands have such a ferocious style that results in quick and hard-hitting songs.  While this type of music is performed as well as possible, it is still limited.   Still, fans of the style will find a great deal of things to like with Benighted’s newest musical attempt.  Things are indeed proper to a proper finale on Mass Grave as well, ending on one of the stronger moments of the disc.