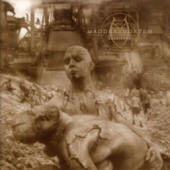 Originally called "Mystery Tribe", Madder Mortem has been steadily releasing albums since 1999. "Deadlands" is the first offering with The End Records for this Norwegian band.

"Deadlands" is fun to listen to. It took me about a week of spinning it before writing anything about it. I just felt like playing it for the fun of it. I liked the song 'Necropol Lit' that could be taken from The End’s webpage and was told by them that I would like the rest of the album too. Sure thing and chances are that the same will happen to you. 'Necropol Lit' has this catchy beat and riffs that hooks you instantly. The singer's voice is strong and beautiful. I would dare compare "Deadlands" to a moderate "Lover of Sin" being driven by heavy guitar sounds, beautiful female vocals singing a different type of Gothic melody.

'Rust Cleansing' is where you can start looking for the less aggressive side of their music and enjoy Agnete’s gorgeous and harmonious voice while you are there. Wipe your nose and stop crying you hardcore fanatics! This unorthodox band doesn't sound wimpy don't worry, just go on. 'Faceless' is not only calmer but also quite dramatic as it turns out. If you like some Prog structure in dark music, well 'Distance Will Save Us' has this edge to its "calmer" side. Not completely calm though but it's cool since our mind is wide open by now! Dramatic and chilling experiences await your ears next with 'Silverspine' involving once again, excellent vocal performances. Great heavy doom riffs with that! 'Jigsaw' is a heavy Avant-gardist Gothic marvel that matches the intensity of the lyrics. 'Deadlands' has this haunting melody and atmosphere, strangely beautiful and so intense.

What about the other songs? Well, now that you have an open mind, it's up to you to find out! One last hint: 'Resonatine' last ten minutes...