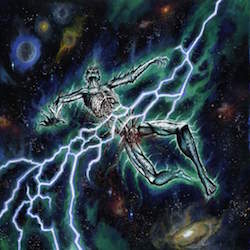 If you're any sort of extreme metal fan and aren't familiar with Dark Descent Records, get yourself acquainted with them real fast. The label has been steadily churning out stellar releases as of late from bands such as Krypts, Blood Incantation, Horrendous, and Crypt Sermon to name a few. For me, they've been the "it" label when it comes to death metal. To add even more substance to the label's already mammoth roster, Finnish death metallers Gorephilia's long awaited sophomore release Severe Monolith drops in March.

Severe Monolith is a total homage to the old school American death metal sound, drawing plenty of influences from the likes of early Morbid Angel and Immolation. There are no songs that stick out more than others. In fact, all the tracks seem to blend together which isn't necessarily a bad thing.  This is an album best enjoyed as a whole and there's plenty going on to keep one's interest throughout its entirety.

What Gorephilia have done here is managed to create a highly enjoyable death metal album. Sure, this particular sound and style have been done before but that doesn't make the final product here any less effective. The band is new to me but after spinning Severe Monolith several times, I understand why long time fans have been anxiously waiting for this one.