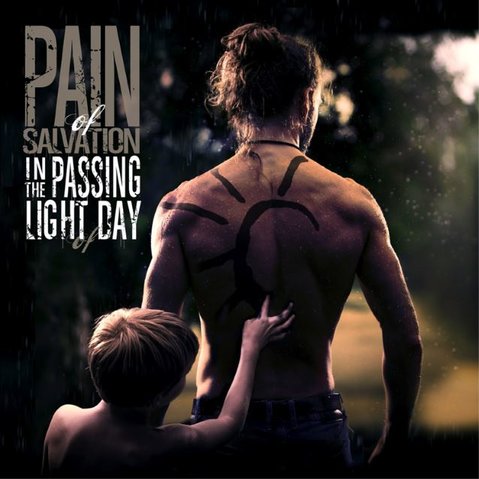 Type: Full-Length
Release Date: January 13th, 2017
Label: InsideOut Music
Genre: Progressive
1 On A Tuesday
2 Tongue Of God
3 Meaningless
4 Silent Gold
5 Full Throttle Tribe
6 Reasons
7 Angels Of Broken Things
8 The Taming Of A Beast
9 If This Is The End
10 The Passing Light Of Day
MetalBite on YouTube

I once dreamed of death. It was not the Grim Reaper wearing a black cloak and holding a huge gleaming sickle, determined to take me out of this world once and for all, but a lady with white hair and sad eyes. I was in a hospital room, plunged into the cool, distant light of fluorescent lights, looking out a window that showed a distant, colorless world and listening to the rhythmic beats of medical devices, as if they were a song, the song that kept me attached to life. The lady with white hair and sad eyes looked at me with regret, saying without moving her lips that she did not want to take me, that her heart was shattered by each beat, that the weight of her task was too heavy. Death told me to fight, to live.

I do not know if Daniel Gildenlöw saw death in the eyes as he went through hell while struck by a meat-eating bacteria that almost killed him. But what I do know is that the very concept of facing death so closely, even if only in a dream, is enough to disturb a person, tinker with their perceptions, yearnings, and anguish. And who will say what it's like when facing it so closely. No matter how much Daniel composes, writes or talks about the episode, we will never know completely what went on in his mind, how he survived and transformed after the painful and desperate experience. It is too personal, perhaps untranslatable in its deepest magnitude. In The Passing Light Of Day is a powerful work, where Daniel expresses as best as possible his own encounter with the near death in a room of Swedish hospital.

Not clinging exclusively to old formulas of the past, the disc runs like a tempestuous journey through a troubled and disturbed mind, full of fear and despair. A flood of emotions transposed into sometimes complex and irascible arrangements others simply and touching. Maybe a winding, suffocating journey through the five stages of mourning.

We have more intense moments of rock/progressive metal, referring to the origins of the band in the distant past of the 90's, such as 'On A Tuesday', 'Tongue Of God' and 'Full Throttle Tribe' where they lavish technique and feeling in arrangements and complex melodies, as well as somber and full of tension. A treat for any veteran fan of good old prog metal. There is also a side that screams and exudes a sense of urgency and fear that manifests itself in different ways. 'Silent Gold' is an almost acoustic ballad, simpler and more direct impossible, but absurdly charged with feeling and the desire for comfort and security in the midst of the storm. Meaningless is anguish, sexual tension, about the existential terror of feeling no longer the owner of oneself. For me it is already a classic of the band.

'Reasons' is experimental, with an avant-garde touch with which they have flirted in the past. It makes me think about BE (2004). 'Angels Of Broken Things' and 'If This Is The End' bet on slow builds that lead to grandiose and intricate climaxes, full of strength and personality. 'The Taming Of The Beast' is the most "different" track of the album, something that goes back to classic rock, perhaps a subtle hint of country. Energetic, horny, hungry for life and living, the encounter with his personal beast, sometimes intangible, other times his most primal driving force. I hope they play the shows, it would be fantastic.

The title track is almost a disc within itself, or a sepia short film full of memories, regrets, but also joys, jubila-tions, smiles and love. Although its fifteen minutes is not the most diverse and complex song of the album, it is quite simple and intimate for the most part, punctuated by vigorous apices that do not even explode for good. A beautiful reflection on the end, on the unspoken and unmade things, on the moments of the past that have irri-tated us and now seem so distant and so meaningless. Beautiful, just beautiful. Looking at it as a whole, I think I can say that it's one of the most profound and touching things I've ever heard in my life.

In The Passing Light Of Day is an absolutely honest and visceral work, floating with dexterity among all territo-ries where the Pain Of Salvation has already ventured. It has the hermetic and technical prog of Entropia, One Hour By The Concrete Lake, The Perfect Element I and Remedy Lane, as well as the conceptual daring of BE and Scarsick and finally the most humane, psychologically and sexually dense footprint of Road Salt One and Two. Everything there, in greater or less proportion, forming a work that from this has its own identity, influences and coherence. Already one of the strongest candidates to be the best record of the year, even though it is only February.

Daniel Gildenlöw can be a difficult person, with an incredibly strong personality (perhaps the reason that makes him the only remnant of the band's original lineup), but it's definitely a genius, one of those enlightened people who came to rest on this blue stone lost in the middle of the universe to make a huge impact on people's lives. An artist like the few can be.
Thanks for still being with us, Daniel.

Pain of Salvation has the progressive mood to match their namesake.  In the Passing Light of Day is a deep and emotional journey that has many twists and turns along the way. The songs vary in volume as there are quiet and louder tracks.  The entirety of the album works because the variety always causes the listener to tune in at utmost amount.

The soft moments are serene and the louder moments rock out hard.  The entirety of the album is one that constantly has the proper mood for each moment.  There are many poignant heavier moments, but it’s the final track of the album that leaves you with the most satisfaction by ending the album on such a somber note.  The buildup towards this track is always changing and consistently interesting, however.  The album certainly isn’t an easy listen and it takes multiple listens for the notes to sink in completely.  There is a certain amount of depth to songs that get better the second time around, however.  The album shows an ability to endear itself atmospherically in a way that makes what’s around the next corner compelling.  Musicianship is solid with excellent guitar playing, drums and the addition of keys at the appropriate moment.  There isn’t much to complain about with the album.  One wishes the band would be more progressive as it seems they take some of these songs to areas a band like Faith No More would be comfortable with.  A more pure showcase of progressive talents might improve the album, but it also might not.  It also seems that some moments are more memorable than others, but this can be overlooked.

The entirety of the album is a strong progressive platter that has the right amount of variety to please just about any listener.  Fans of progressive metal need to take note of In the Passing Light of Day.