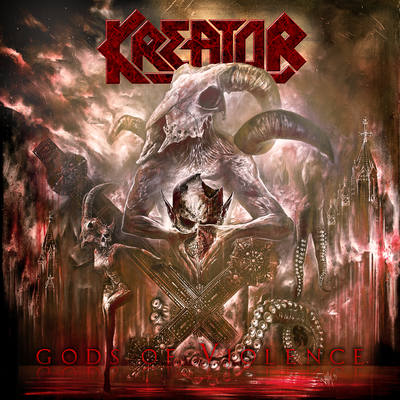 Kreator once released pure brutality. Later on, they were not afraid of some more or less courageous experiments. Today they are neither overly brutal nor experimental. Their compositions ooze out maturity and experience from every pore. This is regrettable. Furthermore, they have lost their autonomy. Somebody has told them that every song must have a catchy chorus; "Satan Is Real" follows this order. Another guy pointed out that even the most furious song needs a melodic part; "World War Now", actually a strong and vehement piece, suffers exactly from its lame part. Give your German fans a candy, a third know-it-all said; lo and behold, "Fallen Brothers" holds some German lines (the next Wacken Open Air comes for sure). Forgive me that I am not willing to list further examples.

Well, all these details are annoying, but the most irritating fact is that pretty harmless harmonies destroy the power of songs such as "Totalitarian Terror". Its melodic bridge is terrible. Thrash was meant to be an explosion of energy, not a kind of stop-and-go system. Yet Kreator offer a pretty polished form of mainstream metal with acoustic intros, emotional intermezzos and well-dosed parts that give the guys with a less radical music taste a reason to lend an ear to the album. Clever strategy, but not very authentic. It seems as if the business has taken control over a once independent band. I am definitely not the one who is seeing through the hype, but Kreator's tactical move is more or less obvious. Okay, Mille's slightly grim voice has never been outstanding and it also does not dominate the new songs. Instead, the mid-harsh thrashers try to combine relatively straight and fast parts with rather hymnal or less dangerous sections while the guitar work defines the compositions. The guys are good songwriters and they have a knack for effective designs, nevertheless, the majority of the songs sound somewhat cheap. Nobody expected a new Flag of Hate, but did they have to do it in such a predictable way?

Talking of predictability, it goes without saying that the production is perfect or what Nuclear Blast considers as perfect. Gods of Violence, the top candidate for the most vapid album title of the 21st century, sounds voluminous, clean and soulless. Every technician with dirt under the finger nails did not have access to the recording sessions. This is not "Thrash, Altenessen", but "Thrash, Düsseldorf" and you must know that Düsseldorf is a pretty chic city in Germany, not far away from Kreator's home base. A certain amount of good ideas cannot be ignored, but they are not able to shape fantastic songs, probably because Kreator, a flagship of its company, are confronted with social constraints that do not allow a really sharp and spicy thrash album. Good riffs are not missing, but they have to fight with all these lackluster details that the band has integrated as well. So, if your heart beats for slightly synthetic thrash of guys who are intelligent enough to avoid compositional hits below the belt, Gods of Violence is your album. If you do not like Maiden-esque "Thrash" whose commercial intention cannot be ignored, you better keep your fingers away.

As such, I believe the band has evolved nicely and is keen on making their new album as powerful as possible.  The songs often alternate between the harsher segments and moments of harmonious bliss.  The album is thus nicely balanced.  Make no mistake, however, when the album wants to shred it is perfectly capable of doing so.  The first real song on the disc World War Now blasts out of the gates for example and brings a vicious attack presence to the disc.  There are a large number of moments that bring the aggression in a similar fashion.  The nice aspect of this disc is its injection of melody to other portions.  It makes for an album that has more depth than a typical thrash release.  It also elevates this disc to the top of the heap for the 2017 thrash releases thus far.  The musical performances are all solid.  Nice guitar riffing complements the solid drumming performance.  The vocals are rough, but fit the jagged edges of the guitar riffs nicely.  The problem with the disc lies in the fact that it really provides nothing new.  The music has been traversed in both the thrash and melodic death metal genres and it is very similar to albums already present there.

Other than this minor issue, Gods of Violence really is a rousing affair.  Thrash fans need take notice and pick up this album at all costs.