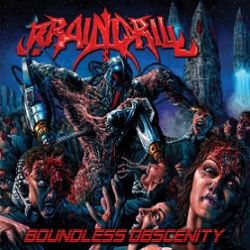 Boundless Obscenity is undoubtedly Brain Drill's most matured album yet, (although I thought the last album was completely fine too). Most the stuff that the band has put out has been kind of all over the place without a care, but when they got to the studio to record what will be their last and final album, they stepped up their overall game.

This band gets shat on a lot due to the unnecessary guitar masturbation which occurs in pretty much every song by these guys, but on this album Dylan has seemed to put together the guitar parts as best and tight as he can. The riffs are solid and consistent, particularly the opening riffs on every track, they aren't all that messy like usual, rather more solid and structured as I just mentioned. Obviously I have to point out the guitar work since this is a Brain Drill review, as it's the base of all Brain Drill criticism. Aside from the main constant riffs, the playing is generally improved to the best quality for an album like this. All the songs have their own flow and don't fall in a pool of randomness or dullness, they manage to stay up strong and consistent until the album ends. The best song of the album is 'Infinite Oblivion', it's the main highlight of the album.

Aside from the guitars we have to talk about the other things too, of course. The drumming is magnificent, seriously. For a live studio drummer, this man has got it all. Alex maintains a constant speed and tempo and does fills and blasting perfectly without messing up, it's pretty much just as accurate as a drum machine would be, he's one of the many human drum machines in the metal community. You also just can't go wrong with the gravity/hyper blasts, which he also has too. It's scattered all throughout this album and they're all perfect. Along with Alex's great drumming, the production and the type of sound the drums have increase the basic quality of the drumming. You can’t go wrong with a good drummer and very good drum production. Another big part of the usual critique of this band is the over-the-top drumming, which has disappeared slightly with this release. Good drum work with less filler stuff, and more stylish things instead. The vocals are just alright, nothing amazing at all. Decent at best. The vocals are the worst part about this album, but they aren't TERRIBLE. Just decent enough and makeshift for an album like this. The work of the band's past primary vocalist was better (mainly in Quantum Catastrophe). If the vocals on this album were done by Steve Rathjen and sounded like how he was on Quantum Catastrophe, or a vocalist similar to that, it'd be much better. Again, the vocals on this album aren't bad, they're just makeshift, amateur, and decent.

This album is good for sure, but you definitely have to be in the mood for it. Despite what I all said, this album can be kinda cheesy and stale sometimes, but only sometimes. Other than that, it's again a good album. I'm a huge Brain Drill fan, I don't want to point out the bad things in this, but you just have to; obviously. Solid album but not flawless.

Boundless Obscenity is clearly the band's most improved and structured work. It's enjoyable, tolerable, and not all that bad. Although it's not an album that I consider a favorite or listen to a lot, I'm not going to deny at all that this is a straight banger album.