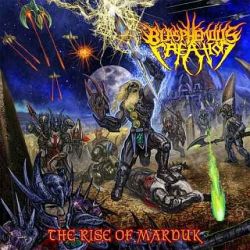 American metal is more than just alive at this point… its explosive, especially with some of the underground acts that are making some huge waves and even nasty rumblings that are being felt across the metal world.

Throughout the ten tracks offered up on the disk… one thing comes clear across the entire spectrum of the album- just how brutal it is.  I was impressed on songs like Tablets of Destiny and Serpent Queen, the balance of melody and heaviness in perfection. The guitars are bold and yet show such finesse through the fury, the bass bludgeons your very senses at every turn all the while the vocals bark its anger out. The band truly does everything right.

The only drawback to Blasphemous Creation’s album is the criminally thin sounding production which ends up taking some of the strength away from the album.  I suspect it was done on purpose, but I am not a fan of this style of thin sounding mixes.  I still like the album no matter what, but if I had to nit-pick… this was the only thing I want to change. This is still a good album to have in one’s collection… so buy it.