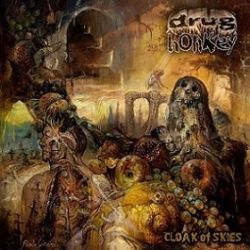 Chicago's Drug Honkey is labeled an "experimental death / doom" project, and however aptly that description fits the band, there lies underneath a sincerely volatile wall of vulgarity and thickness that you can't help but be either impressed with or distracted by in its slow moving effort. I can almost guarantee that you've not experienced an album like this all that often.

The latest opus, Cloak of Skies opens with the swamp-like 'Pool of Failure,' a tempestuously slow moving musical fog that seems to just settle over your head like a haunted battlefield rife with activity, and the album only gets better from there. In my middle age I've heard more than my fair share of dark and brooding albums that either hit the inside mark or fall flat in a mire of "try-hard" patterns. Drug Honkey doesn't fall into the latter, seemingly forcing the obedient listener to become sucked into this gaping maw of 'psychadoomic' music that you can't help but be drawn to on a cerebral and emotional level. There is nothing happy-go-lucky or uplifting about this music; if I were forced to describe it, I'd simply say that it's an interesting setting for a mind in turmoil and bewilderment.

Vocalist Paul Gillis offers up a throaty, summoning tone that isn't your run of the mill death metal vocal. I used to think that Tom G. Warrior's vocal performance on Celtic Frost's Monotheist was about as frightening as it gets, but without all of the bravado and thin pretense Gillis' performance calls upon the darkest recesses of the stomach. It bounces between a mocking, distant calling and a bellowing proclamation that can also be found evenly in the track, '(It's Not) the Way.' It's here that the band's true taste for experimental musical psychosis really emerges as a permanent fixture. By the time they cascade into 'The Oblivion of an Opiate Nod' I'm not totally sure what I'm feeling...or why I'm feeling it. I only know it's something so interesting that I can't unhinge my mind from it. It's really been a long time since a CD has grabbed me like this, but it has, soliciting repeated listens.

All of that picturesque worship aside, let me just sum it up by saying that this is metal music for a very cerebral collective in that it will take you places you never realized you could go. Death metal, as a whole, provides the aggressive release with some (usually) very basic lyrics that resonate for a longer duration, whereas the other genres (i.e. thrash, speed, black, et al) usually rely on perfectly-crafted riff assembly and brief storylines over speedy galloping to engage and excite, and all of these factors make for some fine metal music all over the proverbial board. Drug Honkey, however, in its barest and most primitive form, pushes the boundaries with long, fascinating pieces of what you may think is a large puzzle awaiting formation, yet seems to just offer short and suffering stories without any real need for embellishment. Everything you need is offered in the music, that haunting melodious assault on the senses that doesn't stagnate. The fact that the lyrics are intelligent, dark visages of depression and searching only add to the majesty of the music herein.

I've not heard an album like this in a long time, and I've a feeling I won't any time soon until the band decides to once more open the portals of the diseased inner self to a wanting, appreciative audience.