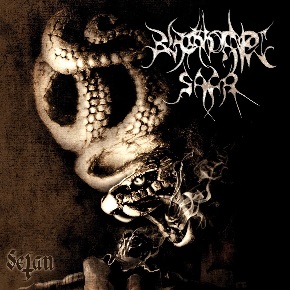 ::   ::
Type: Full-Length
Release Date: June 30th, 2014
Label: Seven Gates Of Hell
Genre: Black, Death
1 The Voice Of Doom
2 I Am Who I Am
3 Heritage Samael
4 Written Sperm And Blood
5 Proclamation Of Divinity
6 Gall And Wormwood
7 Religion Fallen Angel
8 Blackhorn Angel Infinity
9 The War Of All Against All
MetalBite on YouTube
MetalBite on YouTube

Blackened death is still alive in the bowels of Eastern Europe, and more specifically Poland, where Blackhorned Saga calls home. The band's third release, Seten, is a 30-minute foray into some fairly ornery music, and while nothing is necessarily new here it's a pretty entertaining release.

Pretty much everything you might expect with the current run of blackened death metal is found in Seten with all of the speedy nonchalance usually associated with it. As I said, not much will shock or otherwise assuage your need for something newly innovative, but on the whole the Polska crew manages to delve deep into the well and pull forth a musically sound effort. The faster tracks round out the sound to an expected degree, but it's the slower, more crafted tracks like 'Proklamacja Boskosci (Proclamation of Divinity)' that almost carry a Burzum-like feel to them in primitive guitar tone without losing any quality. It's in these somewhat less frantic tracks that the true black metal spirit can truly be heard and appreciated. The following track, 'Kielich Goryczy (Gall and Wormwood)' has a definitive early Norwegian black feel to it without copying that ancient style so distinctly that ho-hum cries of piracy are abound. I tend to gravitate more towards these type of tracks myself, so I suppose it's safe to say lovers of both genres may find something engaging here.

While reinventing the wheel in this music is never going to happen, managing to assemble a collective worthy of visitation in this over-saturated medium is about the best you can hope for, and Blackhorned Saga delivers a competent, albeit familiar half-hour of tunes easily admissible as worthwhile.