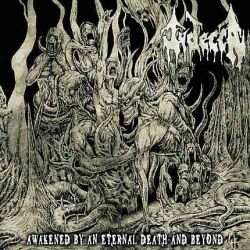 From the glorious Floridian death metal movement emerged a lot of main players that are still around and going strong today, such as Cannibal Corpse, Deicide, Obituary, Morbid Angel (the jury's still out on this one), and Death, whose very existence capitulates on and surpasses the fact that mainman Chuck Schuldiner has been gone for over a decade now. Sadly, many a great band never got up to the level of recognized greatness as their contemporaries; Brutality, Assuck, Monstrosity, Diabolic, Atheist, Nocturnus, Massacre (Kam Lee is criminally undervalued as one of the first, if not the first to render the growl a necessary and valuable part of the music), the list can be endless. Add my current listening pleasure right now and you have another lost band from a vastly important time in metal history: Judecca.

Judecca didn't set the underground on fire with their brand of death metal, but they definitely had the formula down pat back in 1991. My current CD running is their 2013 compilation, Awakened by an Eternal Death and Beyond, a logical and important addition to any true death metal fan's library. The collective houses the band's entire discography for convenience and historical symmetry, which includes the original 1991 and '92 demos, the Awakened by the Stench of Death EP, and the 1996 Beyond What the Eyes Can't See... full-length. It's a long-awaited compilation since the original Wild Rags releases can now command a few extra dollars on secondary markets.

Florida, and particularly Morrisound, the famous Tampa recording studio that was a breeding ground for these southern bands, was noted for producer Scott Burns' crisp, territorial sound applied to many of those local bands. No matter what stone you threw down there at any given time, you'd invariably hit a band that used and overused Burns' talents until the musical well ran dry. The difference that set Judecca apart from some of their peers was the very non-typical Florida sound, often sounding more like a cold Sweden counterpart than sun-baked beach natives. Granted, there were periods where the band was very noticeably American, but they weren't lumped into that Tampa fold, which may have been both a blessing and a curse. The vocals were a throaty husk of heavy bellowing that seemed to transcend the typicality of American death metal. Judecca was a tight, moderately-paced machine capable of creating atmospheric deluge with a slower track ('The Black Blood of Christ') or a frantic downpour of dark, malevolent insanity ('The Undead'), but the band, while not necessarily innovative, was hard to ignore for any real fan of the genre. There is some very tangible death metal to be had on this compilation; I myself have the original CD's, but it has been a while since I revisited this amazing band, and I'm quite glad I refreshed my palate.

The inclusion of demo tacks on any compilation from this era is widely hit-or-miss in regards to quality, as many factors contribute to the inclusion or elimination. The use of analog tapes were the medium of choice, and deterioration and general misplacement are always the main reasons for these tracks being omitted. Happily, the demo tracks on this release are of pretty high quality, a true gift considering the aforementioned maladies that often befall these old tapes. Great care was taken to assemble this Judecca release, and it's well worth your attention and subsequent inspection.

When a band's career is cut short due to any series of mitigating circumstances (i.e. changing musical climate, interior strife, lack of funds) we usually find these gems lost to the underbelly of short attention spans or a lack of real promotion or 'noise' about the band(s). The under ground metal world is literally teeming with older bands whose mp3 files are floating around the 'net on any given blog for anyone to download at will. Not every band is fortunate enough to be remembered, and not every band should be criminally lost to time, so we hope for a collection like this Judecca disc to keep us well informed about a time period that was so indelibly important and historically sound. Thankfully, many metal fans from “back in the day” are now running small labels and distros, so the influx of old recordings now seeing their way to vinyl and CD is always surprising.

Take advantage of the gracious time and efforts put into these excavated diamonds in the rough. It's never too late to support good bands of any era.