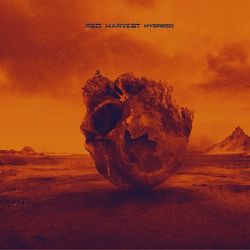 The great thing about being into music is that no matter how long I've been listening to metal music (40-years this summer, to be exact) there will always be a band that pops up on the radar that I've never heard of for whatever reason. I honestly thought I knew almost every great band in Norway from 1992 on, but even old farts get pleasantly surprised on occasion.

If not for the recent reissue of the Hybreed CD, Red Harvest might have taken even longer to get into my psyche. The best way I can describe this band's sound, circa 1996, is that it's slower, crunchier thrash with just a infinitesimal hint of doom and more-than-generous sprinkles of industrial hanging over the music like an erratic storm cloud. After sitting through it for the second time, I can't believe this band passed under my nose for so long.

What I find particularly interesting is how the tracks don't necessarily follow a “flow chart,” yet nothing seems out of place. It is, quite literally, the definition of a perfect potpourri in terms of musical content for one release. The transitioning between tracks is about as even as I've ever heard. The vocals bounce back and forth between a echoing yell that almost begs to be heard and a distorted bevy of muddled narratives that cause rapid brain activity. For example, a track like 'After All...' provides a meshing of the aforementioned “calling out” and a haunting spoken verbiage seemingly from a dark and damp cellar, only to merge carefully and cautiously into the industrialized instrumental track, 'Ozrham,' like a finely-crafted muscle car shifting into 3rd gear. The nearly 10-minutes spent inside this track are enough to assuage even the most ardent critic of the two genres colliding ever so surreptitiously, even if bands like Fear Factory have made the marriage acceptable on the more commercial scale in recent years.

The even flow of the styles condensed herein is just amazing on so many levels. Usually when I sit down to ingest a certain album by a band, I get a feel and general knowledge of what the band is about ahead of time, but nothing I read could have prepared for me for the perfect blender-mix of what Hybreed houses. Some might also get the notion that the album would be pedantic with the length of the songs, but I can honestly say that nothing ever seems bothersome or boring at their selected time frames. Everything on this CD is just flawless in both presentation and design.

This reissued set comes with bonus CD of two extra tracks, 'In Deep' and 'The Burning Wheel,' both of which assume their rightful place among the elitism of the original tracks. It also showcases tracks from the band's performance at BlastFest last year, which panders to the heavier side of the band's repertoire with tremendous results. This isn't just some fluke studio band built for speed and endurance within the confines of the studio walls; this is the real deal through and through, leaving nothing out in the live setting. Some CD's by many bands are reissued and you're left to wonder why the cash grab machine is sullying the senses with tripe that sucked the first time around. Red Harvest is no such slouch, and Hybreed deserves to be heard by many new ears some 20-years later – after all, it took this old man 20-years to find them, so some things old can be new again.

This has to be the single best industrial / metal album these ears have ever been privy to, and I definitely want to seek out the rest of the catalog, which, by all accounts, reads like a similar play book for said musical direction.

And they say black metal was the only great export from the Norse lands....