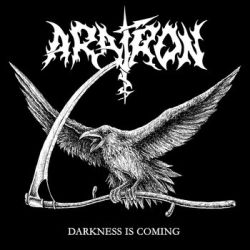 With two demos under the belt, The Netherlands' Aratron issues a fine debut CD, Darkness is Coming, and attempts to add its own brand of death metal to the proverbial map.

For me, what sets Aratron apart from many other death metal bands of today is the lack of over-saturation in production and translucent tempestuousness wrapped in speed. I often think the horrid “loudness wars” of the early 90's has infected far too many kids of today who fail to realize what an insult that little epidemic was. This release has a moodier, slower vibe to it in select spots – it's almost like you can hear the decay slowly swallowing and covering the remains of a commercial music cadaver. Make no mistake, there is plenty of crunch and speedy dissemination of riffs and volatility here; it just paces itself in all the right areas, for the most part. Vocally clear and discernible, your typical deathly growl is prevalent and handled evenly, fitting the music well. It's always a plus for me to not hear the ridiculous ticking and squealing passing for vocals these days.

Tracks like 'Primal Shrine,' 'Driven by Evil' and 'Poisoned Soul' provide a caustic journey into the underbelly of death metal, but don't go looking for a total reinvention of the genre. With the most basic and solid formula, Aratron waves the battered flag as well as can be expected in a movement that is criminally overrun with old bands reuniting for the sake of nostalgia and newer bands failing miserably to recapture early glories from their heroes. The tone of Darkness is Coming is one of brutal serenity that only a band steeped in the genre for years can provide. Bassist Maurice Sas and vocalist Ronald van Baren have been kicking around since the early 90's, so the momentary fad of metal music for rebellious teens doesn't apply to these guys. They put out their best efforts in a genre rife with imitators and ho-hum bands regurgitating the same old, same old.

Lyrically, Aratron keeps it simple, yet articulate, which is always appealing for me; there isn't any perfect pentameter to the verses and such where you can almost bob your head side to side in a trite “sing-songy” style. I deem that particular brand of metal the “Nursery Rhyme” pattern in that it's so bland and unimaginative that nothing substantial or memorable can be gained by hearing it. Thankfully, Aratron manages to create interesting and well-flowing songs that keep up with the current standard(s).

All in all, a very solid album that is well worth your 40-minutes of attention.