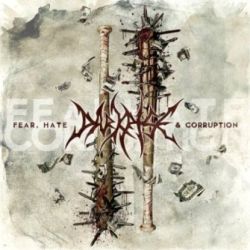 Reviewing a band you have reviewed before can be a bit of a problem.  It can be a shining advancement, a stagnant same old shit or a complete and utter failure.  DarkRise is one of those bands that I face... after many years of reviewing – it is becoming that I am reviewing a band many times.  Let’s see what this act has done since their album Built.

DarkRise from Switzerland impressed me the first time around, giving me death metal that was very traditional and yet held the unmistakable mark of originality and pure power… that was in 2009… this album was four years past that one.  Now let’s see exactly what the band is up to, and see if it matches up to their previous ones – or fails.

Right off the bat, you can hear DarkRise has advanced in their musicianship many fold over previous releases.  The trademark brutal death metal is still there, but strong melodies now add to the attack… add in some wicked thrash elements and even hardcore punk bombastic fury enters into the metallic vortex.  The results are simply brutal and right on the money. Take a listen to songs like bludgeoning riffs of  'Cold' or the punch in the nuts death metal aggression of 'Do or Die', it will take only a second to see that the band has progressed and now is even more of a potent metal force.

It is now very clear, DarkRise is a band that has not only progressed, but transcended out of the limits of the death metal label, but has shown the truest metal acts stay true to themselves – but grows into a beast all of its own.  Truly, this is one album, no matter if it is a few years old, most metalheads will enjoy.