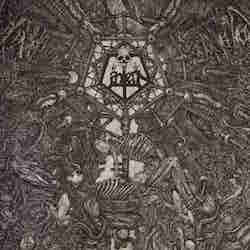 Finnish death/black metal masters Lantern return with their second full-length release II: Morphosis, a rather fitting title considering the the band has grown from an eager and enthusiastic duo to a full fledged five piece ensemble. This album has a very overall unique feel and sound that will be pretty hard for anyone else to top in 2017.

If you're familiar with Lantern's Below album, you will immediately take notice to the fact that this is no longer a solely old school death metal inspired band anymore. The mix on Morphosis has a very modern and clean sound but is still able to capture the essence of the old school influence.

Middle of the album tracks three ('Hosting Yellow Fungi') and four ('Cleansing of the Air') are the two stand outs, both effectively showcasing Lantern's ability to play metal that is technical, full of atmosphere, darkness and total despair.  They almost blatantly soak themselves in elements of old school death metal but wind up doing so in a way that isn't outdated or interesting. The usage of death metal tremolo, black metal chords and full tilt drumming combined with a thrash metal influenced attack on guitar through leads and intricate accuracy are what make Lantern truly stand out above the rest.

With this just being their second album, Lantern have taken a massive leap into well deserved metal noteriety. It's absolutely amazing to see  how they've progressed in such a short amount of time. I won't be surprised if Morphosis makes it into some top 10 of 2017 lists this year!