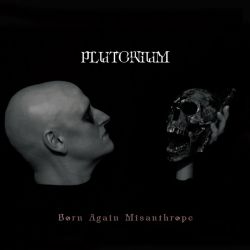 I have heard many bands over the years and many genres as well being a reviewer and a fan and I challenge myself to let that be a guide to different things.  Enter into the ring, Sweden based Plutonium.  This industrial/extreme black metal one man outfit has many releases to its name.... will it live up to its hype.

J. Carlsson is the band and drive behind this project, one he has done for many years now. It seems to be a project of passion and dedication on his part, one since 2003. Chaotic with a very unpleasant wall of noise that simply sits there like an elephant in a Volvo – it is a vast multitude of horrid flaws. Simple lack of ideas completely derail what could have been such an interesting album and it falls face first into a vortex of nothingness.

One main thought was always present though out the full fifty three minutes, the entire album had no direction to it.  Some of the riffs were interesting, yet those little pieces of gold were the exception rather than the rule of the whole CD. The album as a whole had no direction- meandering with almost Schizophrenia meets ADD with the added bonus of Tourette syndrome… and makes the listener to bail out of the CD almost two songs non.  The musicianship, while seemingly good- is still a jumbled collection of half-thought out ideas that should have been left on some forgotten idea recording on your computer rather than on an album.

Oh what could have been… was not… what was, was simply unfocused noise seemingly spat out.  It was a disappointing as hell, and made me long to put one batter music than this.  This CD would be better used as a dog’s toy rather than a record.  Too bad… I have a sense that this gentleman could do many times better- if he actually cultivated an idea with a direction to go along with it.  As it stands, not worth the listen.