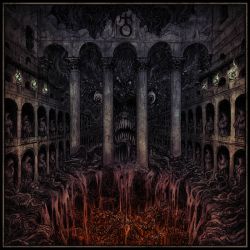 With a title like The Great Tired Ones, one can only assume there is a bit of humor giving reference to The Great Old Ones who happen to be ancient demonic deities which governed humanity; at least that's my assumption. Apart from the humor suggested in the title, it is my belief that it is a gaze into the world as it currently exists. I say this after reading through the lyrics which suggest that the previous Gods have become non-existent in the lives of mankind. Spirituality has been replaced with Scientology, thus causing these deities to abandon humanities' astral realms, all of which comes at a price.

Loathfinder expresses the disgust, shame, and loathing towards mankind by these ancient deities as a collective. One can hear the buzzing of flies at the beginning of "Genetic Gloom," which gives the listener a sense of a large-scale passing. It is a heavy guitar-driven song that has bold death metal vocals mixed with sharp black metal yells. It features a passage of absolute beauty, which begins at the 1:53-minute mark and is played using the combination of an acoustic guitar and an electric guitar. It immediately reminded me of a track I heard on Abyssic's 2016 release titled A Winter's Tale; If I correctly recall, the song is "Funeral Elegy".

"Feast on My Entrails" has a major stoner/doom metal presence throughout the song, and, similarly to "Genetic Gloom," it has an addicting guitar hook that is heavy and worthy of headbanging. Some black metal gasping vocals similar to that of the Norwegian atmospheric/ambient metal band known as Eldamar appear around the 3:40 mark.

A small distaste manifests on "Genetic Gloom" in which a guitar solo is played, but can barely be heard. If that guitar solo was mixed higher the track would have sounded even more fabulous. However; this occurrence is not repeated on the remainder of the album. There is also an electronic element added to the self-titled track, which I found to be unnecessary. That said, these tiny blemishes do not affect the fabric of the material sewn. This is accredited to the diversity of the guitar work and overall song structure of each track. In the past I have heard many 6-minute-plus songs that felt like dragging boulders due to the bland and repetitive nature of the compositions. This doesn't help when you are a doom metal band, as it is traditionally a slower brand of metal. Loathfinder knows when to add various spices to the stew in order to keep the listener interested and alert.

After repeated listens, I have concluded that Loathfinder wishes to play their brand of blackened doom metal and experiment a bit to see what they can unravel and squeeze out of the genre. The Great Tired Ones exploits the potential of the idea, but only in very microscopic portions. I'm okay with the implementation of tiny bits of experimental elements on debut releases, such as the listener develops an ear for them on future efforts, rather than going full throttle on a single future release which could prove disastrous (eg.Suicide Silence,"teehee").

The album ends on a strong note due to the wonderful flow of every song. Each track makes sense musically and nothing seems as though it was rushed or hastily implemented. Though this debut offering is an EP it does possess a full-length feeling, which is a good thing considering how pleasing the music is.