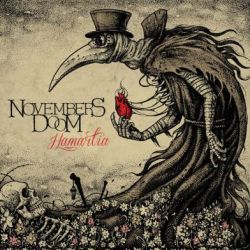 Novembers Doom brings the doom to the table. The music here is very passionate and emotional, but it also brings a hammer like presence to the table. This is due to some riffs that are altogether more poignant than the band’s last release Bled White. They deliver a huge impact upon the listener.

The music here is similar to My Dying Bride, but lacks the violins and brings more presence to the table. This leads to an album that has chunky riffs that are very vibrant and powerful. The music does lack a bit in the subtlety factor compared to the last album, but the newfound energy the band brings to the proceedings is very welcome. The vocals here are deep and wonderfully emotive, bringing the music to a higher dimension. The guitars are hard=hitting and powerful. The entirety of the musicianship is very poignant. Despite how the album hits hard, there is also a very melancholic vibe present here. The songs are downtrodden, but vibrant in their emotional presence. The mood is very gloomy, but is perfectly kept upbeat by the energy of the riffing. In fact the guitar riffs play a huge part in making this album as effective as it is. Are there any problems with the disc? It stays very reliant upon a sound the band has built up in the past, despite being as poignant as it is.

This sound is very effective, however, and it is welcome the band is performing to this maximum potential. I hope in the future, they are able to carve out more new dimensions. The shift from a more subtle work to this one is effective, but hopefully the band has more avenues to explore in the future. As it stands, Hamartia is a necessity to all of the fans of doom metal.

Chicago based Novembers Doom is in a class by itself.  Heavy, brooding melodic with a pretention for being more of a progressive band than most of the bands out there- they have carved a big time niche for themselves after over 25 years, and have earned major respect all over the globe for their music and vision.

Their album, Hamartia (noun: a fatal flaw leading to the downfall of a tragic hero or heroine.) is another in  a long line of albums that cultivates the metalhead in us, as well as challenges us in ways that most people think metal people cannot do… with our intelligence and emotions. Combining various styles of music while staying true to their brutal heaviness - Novembers Doom impeccably creates something that is simply powerful and at the same time, awe inspiring.

Each song is a work of art, crafted and delivered with style and thought, and yet still as powerful as a baseball bat directly to the forehead many times over. Songs like the haunting guitar and piano along with Paul Kuhr’s evocative vocals on the title track, to the thunder of slowness like the bleak story in Plague Bird show a band that knows its art perfectly and has achieved the brutal beauty and deep melancholy they strived for in every way.