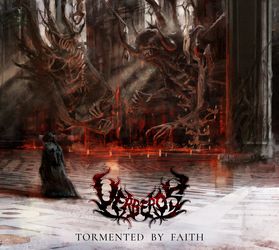 Four dudes with names: Darek-bass., Kamil-dr., Bartek-guit. and Bartłomiej -voc. decided to play some music. Town of Żory, though small, was a fertile place for music since the dawn of time, or at least since I remember. In my memory, names like Vehement Thrower (Vehement) or Eternal Deformity are still ringing, but here and now is not going to be about them. Uerberos was set in motion by its death metal brother - Inset (3/4 of their lineup is supported by Inset). In their creative inventiveness, they recorded and produced their own 10-track album Tormented By Faith, giving the audience a little over 38 minutes of highly energetic music. The young and talented graphic designer Mariusz Harasymów (www.mharasymow.com) is responsible for the highly successful graphic design of the debut.

Album Tormented By Faith, just as any debut, is not without its flaws and although it may be too strong of a word at the beginning of the review, I hope I will not induce any rage or rebellion in the music factory, and the band will draw proper conclusions from my remarks. Well, some musical fascinations are sometimes overly audible. I would not call it a great disadvantage though, because it is rather a natural burden of most bands that are just starting out. In fact, fascination with bands such as Vader, Behemoth, or Lost Soul does not take anything away in any case. After all, these are the bands from which the younger and the older draw fist-fulls of inspirations. Nevertheless, it is quite a feat to turn your musical fascinations into your own image.

Quartet from Żory, did not quite attain this goal on their first album, and we hear quite a bit of the influences from Behemoth’s "Demigod", and in the title song Tormented By Faith there is a fragment  that sounds like taken away from Lost Soul’s Atlantis ... . But I'm not going to condemn this young band here, because their potential clearly indicates that they clearly can still put ‘death’ in death metal. To record such an album less than two years after the band was formed, you need to know how to play more than a bit, so hats off to you gentleman! This highly energetic death metal on the TBF is not technically inferior to the masters and I hope that we will see his successor in the near future. It is good musically already. Everything is holding up. There is a claw and a character. They are tearing it up, they can play slow and then accelerate, to sum it up in one word “thingsarehappening”; and drumming - prima sort, legs are eager to keep up with Kamil. What about their souls, you ask? And I tell you - their souls are as black as the cloth of the Death itself. Indeed, apocalyptic visions dwell in them I say - death and destruction. Production wise although, as for my modest ear, high tones were pushed a bit too high, but this is their first album, so excuse my comments. To end off my rambling - Uerberos is a solid kick in the door of heavily represented ranks of Polish death metal, and Tormented By Faith is an album that despite all the weaknesses comes out with the shield intact - musically and publishing-wise.

I encourage you to lay out some dollars and learn about the new strength of Polish death metal. This penny will not be thrown in the mud, because this album, although with its debut scars, defends itself perfectly, and satisfaction when we hear Uerberos’s second album will certainly be even greater. I urge the band to clench their fists so that their musical "rage" results in even more powerful of a kick, from which yours truly will simply not get up.