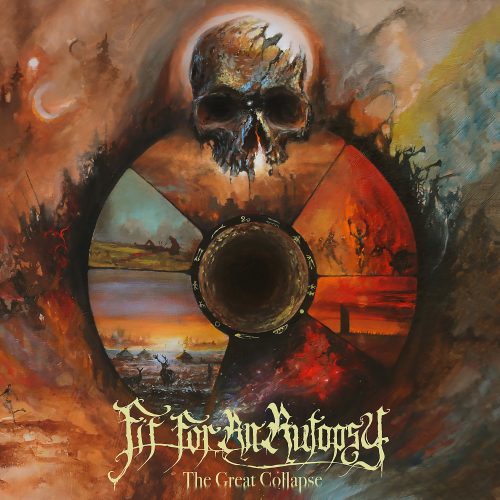 Fit For An Autopsy performs deathcore taken to the extreme. There is a nice amount of dynamics on this disc for one from that genre, however.  The sections that are harsh feel like hardcore ones, but they are very changeable and interesting compared to others from the genre. There are moments here, like the beginning of Terraform or the latter portions of Empty Still, that break up the hectic pace and make for a nice subtle excursion into other territories.

Still, the majority of the disc takes place in the more aggressive form that allows it to become very forceful and impactful. The rifing that takes place is fiery in nature and makes for an intense experience. The band is comparable to Thy Art is Murder, but seems to make for a more interesting experience than what can be found from that band in terms of the dynamic changes. Sure, every band can come out all guns blazing.

The ability to breakdown is one manner of showing the diversity and Fit For An Autopsy is effective at this as seen from the track Too Late. The capability to throw things off guard and change up the music makes for a more interesting experience and that’s what can be found here. This is what separates this release from the band’s last album and other entries in the genre. Still, the more focused and intense moments are done with style and panache and bring about the best possible outcome for the band. The problem with the album is that it still seems very two-dimensional and straightforward. The deathcore genre isn’t the most interesting and more progressive elements could have been added to create a more diverse feeling.

Still, for the deathcore genre, The Great Collapse is about as solid a release as one could hope for. This comes recommended.